Literally out of this world

Tom Neenan's Andromeda Paradox is one to see. Brilliantly executed, Neenan took us on a journey playing multiple characters. This chameleon does well to keep us laughing with his humour and clever punchline.

The story begins as we see Professor Bernard Andromeda an engineer who would forever be over shadowed by his father's success. He sat at his table writing something down as the audience came in. As the lights dimmed to draw attention to him, he begins his story about how he came across an alien artefact that had his name on it. This in turn lead to him finding a small alien, the size of his hand, in which he befriended. Bernard takes the audience, who are eagerly hanging on his every word, along to face his final challenge.

This one man show was fantastic. Neenan plays each character superbly, and keeps the story alive with his talent. I can't imagine how hard it must be to switch between 3 characters simultaneously but Tom makes it look quite easy.

The jokes were well delivered and funny, with each joke being well received by the audience. What I found interesting was his transitions into his dream sequences, which hilariously transformed into a scene of him as a child trying to gain approval from his father.

I caught the man himself after the show to share some of his thoughts and views on how it went. He tells me all about his experience as a comedian and how difficult it is to do a one man show. Check it out in the link below.

Tom Neenan: Andromeda Paradox is performing every day (not 19th) at the Pleasance Dome. For tickets and more information, visit the Fringe website. 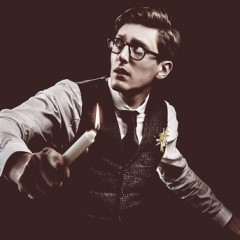 Literally out of this world