Young theatre group gets away with the home run

As you'd expect from the title, the play opens with the murder of a judge and a letter to two detectives at Scotland Yard. The mystery quickly unwraps as more characters are involved and with more mystery than an episode of EastEnders.

The play itself was really enjoyable. The quick transitions between scenes gave the story an even pace for the people to follow. The comedy was strong, not a punchline missed or out of time. It was brought to life by the brilliant ensemble who dramatised every character, and really brought some unforgettable characters to life.

The production value was very good, from the costumes to the use of lighting in each scene. I loved the used of set in each scene. There was one particular scene where a characters confession was animated with exaggerated acting and flickering spotlight to mimic a 1950's silent movie.

I could tell they were working with a fantastic director just by witnessing the acting and vivid choreography and hilarious scenes. There are many memorable scenes, but I will leave them for you to enjoy.

By far I have to say my favourite character was the French woman, not because of her seductive advances on one of the detectives, but her flamboyant performance and charming character accurately defined how French women really are - humorously of course. (NB. I'm French myself).

Overall I have to say, truly strong performance and good sense of humour. To those in search for a show that will keep them laughing and keep them guessing, I'd recommend seeing The Hampstead Murder Mystery.

The Hampstead Murder Mystery is performing until the 22nd August. They are performing at the Pleasance Dome, and tickets and more information can be found on the Fringe website. 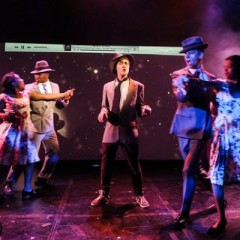 Young theatre group gets away with the home run