Gambling, alcohol and a lot of fighting is the order of the day with this piece, as we sit down and join the Ballardbrothers at their father's wake...

...which just so happens to be at a racetrack on the day of the derby (Derby, by the way, pronounced with a dur not a dar – we're in America now, folks!). Don't be alarmed when the piece starts, their accents become easier to comprehend as it progresses – I must admit when I first started watching, I had no idea what was going on, as I was having plenty of trouble working out what they were saying. They spoke very quickly in a thick-unfamiliar accent - most notably the actor that played Johnny, who was speaking in such a way that at first I wasn't sure he was even using real words. Nevertheless, you learn to understand the accents and then you can appreciate the play for what it is, and it is a very good play. It's funny, there's no doubt about that, but it's also gritty and real, discussing subjects that many plays wouldn't dare touch. Most notable of which is the (and this is a little bit of a spoiler, but nothing massive) discussion about one character's time in prison, and how he, and other prisoners, were treated by their fellow inmates, and it briefly discusses male on male rape. This show allows the audience to see men be vulnerable, allowing the actors to show a full range of emotions, from fear to anger to despair, and this is quite refreshing to see. The stories, tensions, and relationships between the brothers (and their waitress – Becky) make this show, and in the last 15 minutes I was openly weeping, simply out of compassion for these characters.

The production was fantastic, with a brilliant collection of practical effects, including breakable furniture, sugar-glass bottles, fake vomit, fake blood and perfect sound effects – and a lot of cans of "Papst Blue ribbon" (I had lost count of how many they used, I think they need an intervention of some sort). The lighting was basic, but effective and the rest of the set looked like someone's dining room, which is a slight complaint of mine, as it was supposed to be one of the expensive "luxury" rooms that they have at race-days. I will concede, I've never seen one of these rooms, however I doubt that they will look like someone's dining room.

This show is great, it explores complex relationships and emotions, while keeping it largely light-hearted – until you approach the end, at which point it gets incredibly sad, creating great contrast. Your feelings towards the characters all change, as you see the motivations behind their actions, it's a little bit like watching a horse race, as you watch the positions change, and the excitement in the audience swells and wanes.

Derby Day is being performed in the Gilded Balloon every day throughout August, shows start at 15:00 and last for an hour. Tickets cost £10.00, and seating is unallocated, so arrive early to get a good spot! Tickets can be purchased from here, and no, you can't use them to bet. Believe me. I tried. 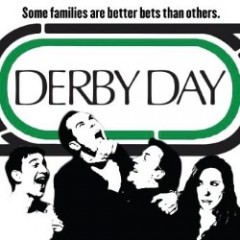 Gambling, alcohol and a lot of fighting is the order of the day with this piece, as we sit down and join the Ballardbrothers at their father's wake...