The Wonderful Life is a routine made by and for geeks. A lover of geekery comes into his own as Lieven Scheire.

Unfortunately, I may have been the wrong kind of geek.

At school, nothing pained and bored me more than physics unless it manifested itself in sci-fi film and television. Scheire's routine was pure physics geekery but not in the whimsical Sheldon Cooper/Captain Picard kind of way. It was actual physics. There were Greek letters, velocity, the speed of light, algebra, the lot. This could have been justified if it were in the amalgamation of the science and the comedy. But it was more science than comedy.

I feel Scheire is a terrifically funny person. His posture and his delivery was typically geeky and, being in his element as a physics geek talking about physics, passionate. But this eventually felt like the dreaded physics lessons that failed to keep my attention in school.

Interspersed in the routine were gags about physicists, Britain, and America, but it was overshadowed by being taught facts.

There were quite a few young people in the audience. Teenagers and below – two of whom obnoxiously brought out their phones far too regularly to, I feel, text one another. One young man was sat in the front row and ate up Scheire and his questions and sums avidly – a Scheire 2.0 almost. Elsewhere was a young man who sat through the show with his head on his parent or guardian's shoulder. At one question, his adult prompted him to give Scheire an answer. The youth shrugged this gesture off.

Much like seeing Will Durst yesterday evening, I imagine it would send the right crowd through the roof, and there's much to work on throughout the month. It's a show of geekery – but only a certain kind of geekery.

Catch The Wonderful Life of Lieven Scheire in the Wee Room at the Gilded Balloon from 15:00 through the festival - https://edinburghfestival.list.co.uk/event/475747-the-wonderful-world-of-lieven-scheire/ 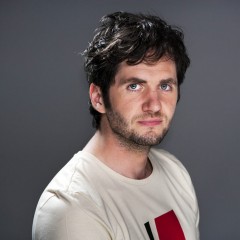 The Wonderful Life of Lieven Scheire

The Wonderful Life is a routine made by and for geeks. A lover of geekery comes into his own as Lieven Scheire.