Voice MagReviewsJP Cooper on the Obe…

I finally got to see JP Cooper live and see if he was as practically perfect in person as his recorded music.

Mary and I arrived early to be able to touch that coveted metal front barrier. He opened with a new song not seen on his previous EPs which surprised me. I expected him to start trying to cater to his small fan base although the new music did fill me with excitement about his future music. It was very similar to his previous music and so was very strong.

His voice was impeccable, as impactful as I expected. About half way through the set he performed What Went Wrong in a new festival guise and this was met with raucous applause. The huge notes in Landscapes were also entirely likely to have caused its noteworthy applause. Courteously, Cooper released one of his songs, for free download, through the Latitude website. This, however, didn't harm the reception when it was played.

Regularly, audience scale and the scale of the reception and sing-along are things that can make a set feel good. With Cooper being a relative unknown, these were not to be taken advantage of – and were out of his control. Despite this, the audience behind me kept growing, the applauses kept getting louder. It is not often you see someone in this slot – 12:20 in the afternoon at a festival like Latitude - with voice and range as expert as Cooper's. The voice's abilities were what brought this set to life and glued jaws to the ground. He enjoyed playing as much as I enjoyed listening, his individual presence whilst jamming to end the set was more than I expected from a singer whose debut festival gig this was. The instrumentals were beautifully played and did justice to Cooper's idiosyncratic musical style.

I was only too disappointed to see the set be only forty minutes and then to have finished early. The audience and myself could listen to that voice for far longer. I would have liked to hear some more tracks from the later EPs Keep The Quiet Out and When The Darkness Comes. The new music left us aching for more music soon, though.

When you hear a voice like this, little else like the stage management matters. In a few years I hope to hear experts echoing my sentiment that JP Cooper is one of the country's greatest vocalists and he deserves a robust and never-ending career. I wait with bated breath for the album release. 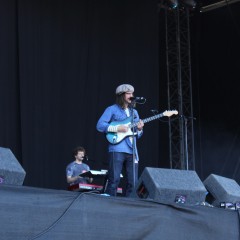 JP Cooper on the Obelisk Stage

I finally got to see JP Cooper live and see if he was as practically perfect in person as his recorded music.