'Empire of Light' is a beautiful romantic drama, written and directed by Sam Mendes.

On 14th January 2023, I went to my local cinema to see ‘Empire of Light’, a romantic drama written and directed by Sam Mendes. The film is centered on the unlikely relationship between a depressed cinema manager called Hilary, (Olivia Coleman) and a young black man called Steven (Michael Ward) who has just started working at the cinema.

The people who work at this Margate seafront cinema in 1981 are a found family. They joke together, take care of each other and create an atmosphere of community. The film is beautifully joyous at times, achieved through the mastery of light and colour from its cinematographer Roger Deakins. The comedic timing is spot on, each little joke getting a roar of laughter from the audience and some murmurs of recognition or nostalgia could also be heard for the 80’s gadgets, ticket prices, films, fashion and so much more that creates a real feeling of authenticity for those who lived through 1981.

But the film is also under toned with darkness. The brutality of the racism taking place on the streets outside the cinema is gut-wrenchingly powerful. It is poignantly communicated with the loneliness Steven feels being surrounded by people who don’t understand what being the ‘other’ is truly like. He and Hilary connect on this shared loneliness. Hilary is revealed to struggle with schizophrenia and childhood trauma, the medication for which makes her feel numb and depressed. She is angry at the world, at the men who take advantage of her, of the people who ignore or pity her and most of all she is angry at herself. Deakin’s use of grayish light, empty spaces, mise-en-scene and many a melancholic mirror shot, accompanied with Olivia Coleman’s astonishing performance during Hilary’s manic episode is testament to the film’s ability to combine joy and immense sadness.

Reading reviews of this film, a common take-away is that it is a love letter to cinema, and although you definitely get that impression of passion for the big screen, I would say that this film is more so a love letter to people and their ability to connect to each other despite the odds. ‘Empire of Light’ finds power in subtlety. There is nothing particular monumental about this film, it is a story about mundane people in a mundane place, however Sam Mendes is able to find the beauty in it. There is, however a lack of a lasting impression from this film, at least for me. I find that as sweet and heartfelt and empathetic as this film was, once it’s over its quite forgettable. Because of this, it’s a real shame that I doubt this film will be able to rival the action-packed blockbusters it’s competing against for your attention. 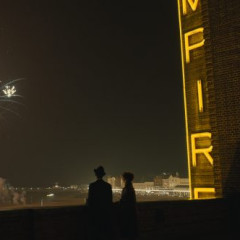 'Empire of Light' Review: A Love Letter to Community

'Empire of Light' is a beautiful romantic drama, written and directed by Sam Mendes.