In Classic! audiences speed-read through 42 classic novels with a charming ensemble cast

When you get into the Pleasance One theatre everything is still, there’s that slight buzz in the crowd anticipating something great. When Classic! crash lands on stage it is furiously paced, an hour where a charming ensemble of six actors takes on 42 classic novels.

These comedic adaptations fly by before the audience's eyes, the ensemble speedreading through Grapes of Wrath to performing a barbershop quartet rendition of Tess D’ubervilles. Written by Coronation Street writers Linday Williams and Peter Kerry, and directed by Joyce Branagh, Classic! is sharp, straightforward and really quite simple. It does what the book props on the stage say – the cast literally reenacts the stories in the same vein Horrible Histories serves out bitesize parody pieces of history.

Audiences can expect to see Pride and Prejudice as a silent movie, Oliver Twist with an American twist and a better-than-SparkNotes summary of War and Peace that should be applauded in itself. At times, some novel sequences (like their source material) may just be down to a matter of taste, for example, the Moby Dick and Black Beauty parts got quite dull as they moved on which is unfortunate as they were two of the longer sequences in the show.

However, the actual foundation of Classic! is not the 42 stories being told on stage, it is the embedded story played out between the actors themselves. The story is fundamentally about a company of actors and their turmoils putting on Classic! whilst on stage in front of an audience – the drama of these antics could easily rival any of the novels they play out. The group’s charisma makes it so easy to be invested in their characters, both within and out of the novels they’re playing that it is easy to overlook some of the weaker retellings.

The actor's performances are endearing, they throw themselves into each character they play whilst matching each other's energy and also peppering in their own personality in well-timed spots which break the fourth wall. Perhaps it is their generally warm demeanour that results in welcome audience interaction. The ensemble takes no prisoners with this audience engagement, moving beyond the front row, they costume up those on the aisle seats to momentarily serve as supporting or principle characters in certain stories (who else was going to play the group of four sisters in Little Women?).

Classic! is a show full of wit and cheek, fully engaging the audience using clever dashes of pantomime, musical numbers and a literal splash zone. There is heaps of slapstick and silliness in Classic! (and with such a bold concept, why wouldn’t you go big?). It's an entertaining and uncomplicated show, and does what it intends to do but it is really carried by the actor's unrivalled enthusiasm on stage. 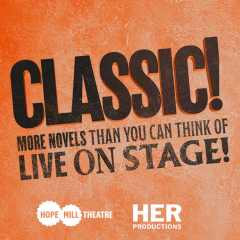 In Classic! audiences speed-read through 42 classic novels with a charming ensemble cast