An unexpected loss of a brother offline results in a sister organising a virtual funeral inside his favourite video game.

How does grief transcend offline reality? Max Mackay’s ‘In Perpetuum’ dives into an online gaming world where a small virtual funeral is held for a user who has passed away. In the short film, we follow the sister of the recently deceased as she remembers her brother in his favourite video game alongside two friends.

Despite the heavy subject matter, the script calls for a touch of light-hearted humour, such as one character entering the memorial scene with ‘Just trying to put the fun in funeral’. At times, the lack of visual expression on their avatar's faces creates a discord between the engaging voice acting – although, this is combated by cuts to the brother’s leftover items and sweeping setting which tells a story in itself.

In Perpetuum is predominantly animated, using 3D rigging to show video game avatars in their prone-to-buggy unpredictable state. The use of digital effects, such as when the avatars are close to a fire and start to glitch, reinforces the temperamental nature of grief and just being able to hold it together. The group of avatars burn the brother’s online items, abandoning their sentiment attached to him in-game in a reflective moment that honours his time spent there.

As the film continues, the fragility of the situation reaches a breaking point when everyone apart from the sister blips out of the funeral. The sister’s avatar is led to a luminous sanctuary where her brother is coded into an NPC with a pre-recorded voice track prefaced with the question ‘Are you my sister? Yes/No’. The editing of the scene is harrowing, as it cuts to the sister behind the screen struggling to process her emotions as she listens to her brother’s soothing voice and dry humour.

Composer and sound designer, Aaron King, creates an immersive composition that is entirely fitting to the setting of the short film – a whimsical and picturesque cliffside and forest. The soundtrack is reminiscent of fantastical MMORPGs like you’re trekking across Elwynn Forest from World of Warcraft – that sense of nostalgia is coded into the film through composition, which makes the emotional impact all the more heart-wrenching.

In Perpetuum is a heartfelt story that considers the impact video games have on our lives. In the same way, memories are forged in an offline reality, they can also be made online. The film argues that bonds made in a virtual landscape are just as valuable as those made in real life. When dealing with grief there is a joy to be found in memories collated in physical sentimental objects or places, and In Perpetuum’s poignant message is that the same can be said with the digital footprints left behind by those we cherish.

You can watch In Perpetuum here 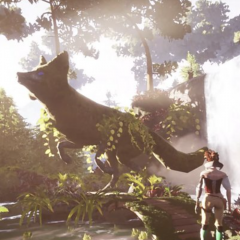 An unexpected loss of a brother offline results in a sister organising a virtual funeral inside his favourite video game.