An artist to whom storytelling is second nature, Louis Dunford is one of the finest talents around, and he doesn’t hold back when it comes to his brutally honest and heartfelt lyrics born out of political frustration and stories he’s collected of his beloved North London.

My Generation is the opening track, and it's filled to the brim with jangling acoustic guitar and themes of life of the North London working-class. “God only knows what we're trying for, God only knows what we're dying for” offers an insight into the emotional and physical aspect of poverty whilst ensuring an excellent musical experience. Similarly Boss Man has a powerful acoustic soundscape whilst touching on minimum wage in Britain and its effects on lifestyle in the UK. It follows various characters, including one who seems to have fled war in his own country and now runs a local off-licence – leaving the listener with a dose of empathy and food for thought. Louis has an endearing way of singing in his own accent, the kind that warrants the phrase “what you see (or rather hear) is what you get”. There's a certain grit with a charming level of softness that reminds you of your mate down the pub. A melodic guitar strums along throughout, giving weight to recognisable lyrics such as “I’m not making a killing, but I'm making a living”, reinforcing the working class mentality that runs throughout.

The Popham EP is a celebration of life and the mourning of death, with track Henry The Brave poignantly telling the story of how reckless driving by police on London streets meant Louis lost his friend Henry. Louis lyrical ability shines through on the track holding no punches with lines such as “killed by the men, who were sworn to protect those as young and as innocent as he”. This sombre track features hunting piano for backing, and the soulfulness of the track is enough to reduce the hardest of men to tears.

Louis latest single, The Angel, closes the EP. The singer revisits his roots, shining a light on the North London borough and the people who live there, even shouting out to Chapel market in one of the verses. The song looks at the gentrification of the area, but acknowledges there is still an overwhelming sense of community despite the area changing to accommodate a more middle class lifestyle. Sonically the song is very similar to other tracks with the slow, melodic tune played on guitar – although The Angel features an anthemic chorus that's sure to be a hit with crowds around the country when Louis goes on tour in April whilst also supporting Jake Bugg for a run of shows. 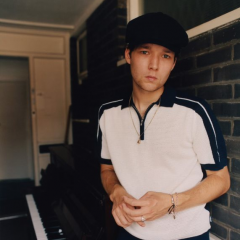