Delgado Fuchs are one of five artists commissioned by the London International Mime Festival to bring their work to the festival’s online selection.

Delgado Fuchs are one of five artists commissioned by the London International Mime Festival to create a short film that isn’t driven by spoken text as part of the festival’s online material.

I R O N I C X is a surreal, sensual, and tender piece from dancer-choreographers Marco Delgado and Nadine Fuchs. The film opens with two figures in full suits of armour sat, almost awkwardly, in a deserted bar.

The two figures begin to dance in the silent and empty bar, the clicking and clacking of their armour making some kind of lovely music for them to dance to. Through their choreography, Delgado Fuchs humanises these metal forms, bringing a softness, fluidity, and humour to objects that would otherwise appear cold and immovable.

When they then appear without their armour, semi-nude, their choreography once again transcends their form, somehow seeming less human than when they were blank suits of armour. Delgado Fuchs beautifully portrays the joy of movement in a way that is high art without being inaccessible, finding both silly fun and ethereality in the way that our bodies move. 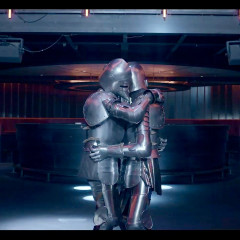 Delgado Fuchs are one of five artists commissioned by the London International Mime Festival to bring their work to the festival’s online selection.