This surprisingly enthralling experimental sound collage looks at climate change in an interesting and original manner.

Coleoptera is an experimental sound collage consisting of three voices that, throughout the 9-minute runtime, grow increasingly dissonant and chaotic.

It begins with a woman explaining that beetles (which form the eponymous taxonomic order coleoptera) were the first pollinators, predating bees, wasps, and even flowers. Soon, a man's voice is heard, and he says that he does not see many beetles anymore and proclaims that they are disappearing. Then we hear the third voice, a woman again this time, who initially provides definitions of some of the words the man uses before moving on to recite linguistic facts. Despite the erratic nature of the overlapping voices, there is almost a sense of musicality that makes the whole piece pleasant to listen to: or it would, were the content itself more agreeable.

Coleoptera is primarily about global warming. Despite being several hundred million years old, beetles are disappearing, and nobody wants to listen. Everybody speaks over each other. The structure of the sound collage, with its burgeoning chaos, is reminiscent of the response by mankind to the climate catastrophe; a calmness in the beginning, but the more time passes the more panicked everything seems.

One part in particular stood out to me. The younger woman’s voice begins to describe a situation in which she was sexually assaulted by her friend’s boyfriend, who moved her blanket and took pictures of her while she was sleeping, and at the same time, their voices overlapping, the man describes the mating rituals and behaviours of beetles. The woman’s story is very upsetting, so there is something jarring and irritating about having someone state banal facts about insects while she tells it. Not only is it a stark reminder of the frequent failure of society to take such things seriously, but parallels can be drawn with global warming: something serious and frightening is happening, and nobody seems to be listening or doing anything about it.

Coleoptera is well-made and, despite the chaotic overlapping of voices, has an almost mellifluous sound design—which is important as it contrasts well with the disquieting content. (If there was no contrast, the whole thing may have been altogether unpleasant.) As is, though, it is an intricate sound collage that cleverly reflects the increasing state of panic we find ourselves in as a result of our inability to act on climate change, and it makes for an enthralling 9 minutes. 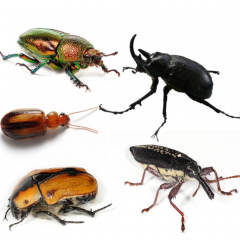 This surprisingly enthralling experimental sound collage looks at climate change in an interesting and original manner.