Boris Johnson has revealed plans to almost entirely cut out the use of fossil fuels ahead of the COP26 summit.

Boris Johnson has said that the UK will be able to rely on cleanly sourced electricity by 2035, which will be achieved through the further development of renewable energy sources such as wind farms. The plans are part of the government’s aim to cut carbon emissions by 78% before 2035, but some environmental groups have warned that the UK is behind schedule on meeting such a target.

Meeting these plans would mean a rapid transfer from unsustainable power stations to renewable energy, and would need to take place within the next 15 years. Remaining coal and gas power sources would be swapped out for sources such as wind, solar, and nuclear – the latter of which has drawn criticism from Greenpeace, who say that the process will be  “slower and more expensive”, due to the government’s insistence on the inclusion of nuclear energy.

These plans for renewable energy follow the government’s announcement last year that they would be banning the sale of new petrol and diesel cars by 2030. Speaking during the Conservative conference in Manchester while visiting a Network Rail site, the PM said, “We can do for our entire energy production by 2035 what we’re doing with internal combustion engine vehicles by 2030.” He added, “where we lead the world now in offshore wind - looking at what we can do with other renewable sources, carbon capture and storage with hydrogen potentially, we think that we can get to complete clean energy production by 2035.”

However, there will need to be significant changes if the government is to meet these goals. A recent analysis has found that the UK has fallen in the growth of renewable power, which is at its lowest rate in a decade. Environmental groups have warned that the government may not be on track to meet its goals, with the Green Alliance warning that ahead of COP26, if the government’s net zero plans have not "met the scale of the challenge... the UK will be headed into Glasgow with little to show by way of progress on cutting its emissions in this crucial decade."

Whilst laying out the plans for the UK’s hopeful move to sustainable energy, the PM also said: “The advantage of that is that it will mean that, for the first time, the UK is not dependent on hydrocarbons coming from overseas,” adding, “we will be reliant on our own clean power generation, which will help us also to keep costs down.” The prime minister’s want for the UK to be self-reliant when it comes to energy may be tied to the recent news that France is threatening to cut the UK and Jersey’s energy supply after a dispute over fishing access in the Channel.

France’s EU affairs minister Clément Beaune has said, “the Channel Islands and the UK, are dependent on us for their energy supply. They think they can live on their own and badmouth Europe as well. And because it doesn’t work, they indulge in one-upmanship, and in an aggressive way”, referring to the UK’s denial of permits to several French fishing vessels. 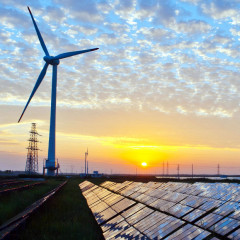 All UK electricity to come from sustainable sources by 2035, promises PM

Boris Johnson has revealed plans to almost entirely cut out the use of fossil fuels ahead of the COP26 summit.