The officers who allegedly swapped misogynistic messages with Sarah Everard’s killer are on restricted duties but have not been suspended.

Two Metropolitan police officers have been placed under criminal investigation but are still on duty following alleged misogynistic and racist remarks shared in a group chat with Wayne Couzens, who was sentenced to life in prison for the rape and murder of Sarah Everard last week. The officers are amongst an alleged six officers involved in the WhatsApp group with Couzens.

The Met has said the two officers on its force that are involved in the investigation are on restricted duties, but have not suspended them – unlike other forces who have suspended the officers involved, despite facing less serious allegations than those on the Met’s force.

The investigation began due to messages found on Couzens’ phone after it was seized following his arrest in March for Everard’s murder. The group chat reportedly contains discriminatory messages, many concerning women, with messages dating back to March 2019.

The two officers are being investigated alongside a former officer, also with the Met, by the Independent Office for Police Conduct. Another Met officer, an officer with the Norfolk force, and one with the Civil Nuclear constabulary are being investigated for alleged disciplinary and gross misconduct offences. Couzens previously served on the Civil Nuclear force until joining the Met in 2018.

It has also recently been revealed that at least 26 Met officers have committed sex offences in the past five years, and serving Metropolitan officer David Carrick has recently been charged with rape.

The Met has recently attracted ire for its advice to women following the revelation that Couzens falsely arrested Everard prior to her murder. The Met had responded to the fear and anger this information provoked by advising that women should do things such as flag down a bus or run away if they feel threatened by a police officer. This advice has been labelled as victim blaming and diverting responsibility from the officers who are making women feel threatened in the first place.

Women’s rights activist Patsy Stevenson tweeted: “Telling us that we should scream and draw attention to ourselves, or call 999 to check, or wave down a bus, is like saying she could have stopped it. She couldn’t have. This was not down to her. We should be able to trust that a police officer is not going to murder us.”

In response to the Met’s advice that women call 999 to check an officer’s credentials, Rhys Morgan tweeted, “It’s ridiculous that women are being told to call 999 to check if the person in front of them is a police officer. Couzens WAS a police officer. Even if Sarah Everard had called 999, what would have happened differently? She would have been told that yes, Couzens is an officer.”

The Met will need to do more to assure the public that they are treating misogyny and related crimes within the force with the proper gravity. Liberal Democrats’ home affairs spokesperson in the House of Lords and former Met deputy assistant commissioner, Brian Paddick, has said, “If I were still in the Met, I would be looking for every opportunity to reassure women in particular that we take this very seriously, and that does not appear to be the message the Met is sending at the moment.” 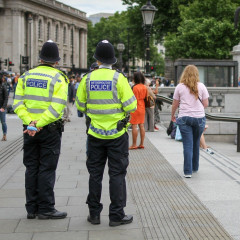 The officers who allegedly swapped misogynistic messages with Sarah Everard’s killer are on restricted duties but have not been suspended.