Tributes rush in for the comedian after his death from cancer on the 18th.

Sean Lock has died of cancer at the age of 58. The English comedian and actor was perhaps best known as a team captain on Channel 4 comedy panel show 8 Out of 10 Cats and its spin-off show 8 Out of 10 Cats Does Countdown. However, he had been active in the industry since 1993, performing as a stand-up comic and featuring in a supporting role on Newman and Baddiel in Pieces. In 2000 he won the British Comedy Award for Best Live Comic and was shortlisted for the Perrier Comedy Award at the Edinburgh Fringe. He was also the creator and star of the 2002-2004 sitcom 15 Storeys High.

As a performer, Lock was known for his deadpan delivery, his material often surreal yet dry. As a writer, he contributed to material for other comics, including Lee Evans, Bill Bailey, and Mark Lamarr, and adapted Émile Zola’s novel La Terre for Andrew Kötting’s striking arthouse drama, 2001’s This Filthy Earth.

Fellow comedians and performers have been paying tribute to Lock since his passing was announced on the 18th, with TV Burp host Harry Hill referring to him as a “comedian’s comedian”. Actor and comedian Simon Pegg described Lock as “brilliantly funny, often smarter than his audience”, but although he was known for his surreal wit, many have commented on his more accessible side. Close friend and comedian Lee Mack states, “I think the appeal of him as a viewer was that it felt like you were with your mate down the pub and he was making you laugh”.

Lock’s agent, Off the Kerb Productions, states: “Sean was one of Britain’s finest comedians, his boundless creativity, lightning wit and the absurdist brilliance of his work marked him out as a unique voice in British comedy…Sean will be sorely missed by all that knew him.”

He is survived by his three children and wife, Anoushka Nara Giltsoff. 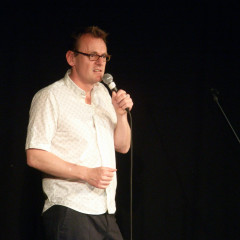 Tributes rush in for the comedian after his death from cancer on the 18th.