MTFestUK 2021 is combining live shows and digital theatre to bring eight brand new musicals to audiences across the nation.

Initially hosted at London’s Turbine Theatre in Battersea, MTFestUK 2021 is one of the major events aiming to reignite the theatre scene after lockdown, delivering a mix of live and digital musical performances.

From 17 - 29 May, the live shows are a chance for audiences to enjoy musical theatre in person again. Following this, the musicals will go on the ‘digital road’ at 12 national venues from 31 May to 4 July. Here is a glimpse at the eight musicals on offer.

MTFestUK 2021 is leading the way for a new reality in the post-covid theatre scene. As we come out of lockdown, theatres must be able to organise performances that are both in-person and accessible online for audiences.

You can book tickets for MTFestUK 2021 here. 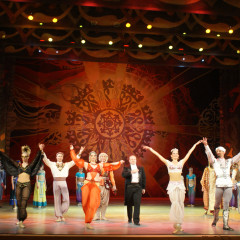 MTFestUK 2021 is combining live shows and digital theatre to bring eight brand new musicals to audiences across the nation.