The three prefectures of Tokyo, Osaka and Hyogo are to undergo state of emergency restrictions, putting plans for the Tokyo 2021 Olympics in July into further disarray.

As of Wednesday 21 April, Japan has reported a total of 542,000 coronavirus cases and 9,700 deaths since the virus first hit the country. The government of Osaka has just announced a further 1,242 cases in the past 24 hours, which is a new record for the prefecture. States of emergency have been requested by the governors of Osaka and now Tokyo, which has seen 130,000 coronavirus cases to date, and that number is rapidly rising.

Japan’s prime minister Yoshihide Suda has said emergency measures will not affect plans for the 2021 Olympic Games. However, struggles with Japan’s vaccine rollout means only 1% of the population are currently vaccinated, and the influx of 14,500 international Olympic athletes, staff and press to the densely populated city of Tokyo would likely generate a super-spreader event.

Originally scheduled for summer 2020, the Olympic Games organisers have been scrambling to avoid further delays. In February, the International Olympic Committee (IOC) released a “Covid playbook” which looks to ban spectators from singing or cheering to protect against spreading the virus. Athletes would also be prohibited from travelling around Tokyo and using public transport. Even the ancient tradition of the torch relay has been disrupted, as torchbearers are being kept away from public roads and the lighting ceremonies have been performed in empty parks.

The prospect of removing spectators from the Games altogether would result in an estimated economic loss of up to $23 billion for Japan. This would negatively impact  Japanese businesses and the tourism industry, when the Olympic Games usually see an influx in revenue for any host country of the Olympics. 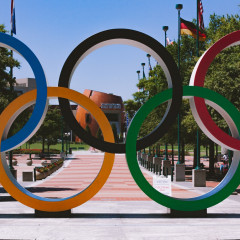 The three prefectures of Tokyo, Osaka and Hyogo are to undergo state of emergency restrictions, putting plans for the Tokyo 2021 Olympics in July into further disarray.