La La Land takes 14 nominations matching the record for most nominated film and musical ever, shared only by All About Eve and Titanic.

Moonlight and Arrival take second place with eight nominations each followed closely by Manchester by the Sea, Lion and Hacksaw Ridge who all racked up an impressive six nominations each.

The Queen of Hollywood still reigns supreme as Meryl Streep takes her 20th nomination with Best Actress for Florence Foster Jenkins and maintains her lead as most nominated actor of all time.

With this year's list it's clear that the #OscarsSoWhite streak has been broken. Lots of diversity can be seen throughout the categories. Bradford Young is now the first African-American cinematographer to be nominated for his work in Arrival. As well as him is Barry Jenkins, director of Moonlight, the fourth African-American in history to be nominated as Best Director. Within the acting categories, there are seven nominees of colour making 2017's the joint most diverse list of nominees ever - most with a strong chance of winning, especially Mahershala Ali (Moonlight).

Ruth Negga (Loving), Naomie Harris (Moonlight) and Dev Patel (Lion) are familiar, British faces of colour we are glad to see all for the first time to help set that record for diversity. Negga makes the Leading Actress list and Harris and Patel both nominated in supporting categories. Andrew Garfield also flies the flag as another Brit in the Leading Actor category for Hacksaw Ridge. With Supporting Actress the most diverse category of 2017, let's hope this continues through to the wins.

Lin-Manuel Miranda is in with a chance to complete his set of awards with his original song 'How Far I'll Go' from Moana. With an Emmy, Grammy, Tony and Pulitzer already under his belt, come 26 February we may see him become the youngest ever "EGOT". With Moana rated better by some than 2013 winner Frozen, many believe he could swing the win. However, La La Land's remarkable double nomination in the same category lends near-impossible competition to beat!

Finally, the last of all these firsts and records, the Best Foreign Language Film nomination for Tanna marks the first nomination ever for Australia!

We can't help but notice that some of our favourite actors did not make the final nomination list this year. Surprisingly, although he won the Golden Globe for his appearance in Nocturnal Animals, Aaron Taylor-Johnson was not nominated for his role and the nomination went instead to Michael Shannon.

Amy Adams was also missing from the list for her appearance in Arrival despite the movie itself has been included in second-most categories. Hers is arguably the biggest snub of this Oscar season considering she was a more likely choice than Meryl Streep. Hidden Figures lead Taraji P. Henson missed out whilst her co-star Octavia Spencer received a second nomination for Best Supporting Actress.

Finally, after Deadpool received Best Picture and Best Actor nominations at the Golden Globes, it was too much to expect recognition from the Academy.

With Jimmy Kimmel hosting, many exciting movies, such a diverse cast of nominees, some wonderful soundtracks and some surprise nominations, 26 February is going to be a night you don't want to miss.

Fire At Sea
I Am Not Your Negro
Life, Animated
O.J.: Made In America
13th

Body Team 12
Chau, Beyond The Lines
Claude Lanzmann: Spectres Of The Shoah
A Girl In The River: The Price Of Forgiveness
Last Day Of Freedom 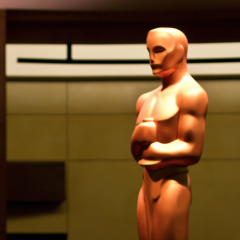 La La Land takes 14 nominations matching the record for most nominated film and musical ever, shared only by All About Eve and Titanic.