On Monday, Lord Tony Hall, the Director-General of the BBC, laid out the direction the BBC will take over the next decade.

Promising to become an "open BBC for the internet age", the vision he has for the BBC includes big changes for iPlayer. For starters, a children's only iPlayer, known as iPlay, will be launching, which will feature children's programming, blogs, podcasts, games and educational tools.

iPlayer will also be opening up to third-party broadcasters. This, in theory, could mean shows like Downton Abbey would be appearing on the VOD service. Equally, the BBC will be prioritising more quality dramas, and ensuring they are available in their entirety on iPlayer. Essentially, think a BBC version of Netflix.

"These proposals are about creating an open, more distinctive BBC. An open BBC that works in partnership for the good of Britain at home and abroad. An open BBC that helps secure the future of public service broadcasting and upholds democracy both at a local and an international level.
"The BBC must modernise to preserve and enhance what is best about public service broadcasting to ensure we continue to have a BBC that is British, bold and creative.
"A better BBC, for everyone."

Perhaps more interesting was his decision to emphasis that this is not "an expansionist BBC". The BBC has been accused previously for being almost imperialist in its ambitions. It often comes under fire from commercial competitors for its funding structure, alleged anti-competitive nature, and alleged bias. This is Tony Hall refuting all of those claims, and explaining that the BBC appreciates the importance of "excellence without arrogance". This is about refinement, and delivering quality content for viewers, not simply expanding reach.

Most indicative of this is the warning that it is inevitable, with the funding cuts the BBC faces, that some services will have to be closed. Hall was not forthcoming with what these are, but we already know that BBC3 is due to move to a digital only form of delivery. There is some speculation as to what might be going, for example, rolling news to be replaced with streaming news, and children prefering the on-demand programmes of iPlay over scheduled children programme.

Other plans the BBC intend to carry out include:

The BBC Charter is the constitutional basis for the BBC. It sets out the public purposes of the BBC, guarantees its independence, and outlines the duties of the Trust and the Executive Board. Each charter runs for 10 years, and the current charter is set to expire on the 31st December 2016. The current Government have expressed a desire for the BBC to cut back on expenditure.

You can read the whole 99 page document released alongside Hall's announcement, by clicking this link. 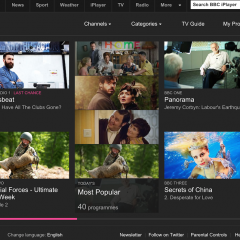 BBC will become more “open” and “distinctive” under new proposals