It definitely isn't about 'stealing jobs'

In the last week there has been a visible and noted change in the stance of the British Government, press and public to the ongoing crisis in Syria, or more specifically, the Syrian refugees who have been displaced due to the ongoing violence.

The turning point, it would seem, was the image of the three year old that spread around social media like wildfire. A haunting reminder of the real horrors people are suffering through, and the desperate measures they will take in an attempt to escape.

But still the establishment continues to debate the right course of action. Should Britain open her borders up to help, or should we stand firm in glorious isolation, continuing to send aid but keeping it strictly overseas.

One thing you may notice in all the debate is the almost interchangeable use of the words 'migrant' and 'refugee'. There is a significant difference between the two, but to understand it there is another term that needs explaining, and that is Asylum seeker. An asylum seeker is an individual who has applied for protection by a State other than their own, under the United Nations 1951 Convention on the Status of Refugees. Once they have been granted asylum, they become refugees.

A refugee, legally, is someone who has fled their own country due to a fear that they will be persecuted due to their religion, race, personal beliefs, or membership to a particular social group. It has a broader context of an individual who is fleeing from a civil war or national disaster, although they are not technically refugees under the definition of the 1951 Convention.

A migrant is a person who has moved from one place to another in the expectation of finding work, or better living conditions. For example, there are many British migrants in Spain, having moved there to retire, or enjoy the warmer climate. Economic migrants are individuals who, either legally or illegally, try to enter another country to try to find employment opportunities. It should be noted that refugees can be economic migrants.

So what's happening in Syria?

Syria is currently in the midst of a civil war, also known as the Syrian Revolution. It started in 2011 during the Arab Spring protests, with nationwide protests breaking out against President Bashar al-Assad's government. Government forces responded with violence, and this eventually morphed into an armed rebellion.

There are now multiple different forces fighting in the country, including the Syrian Government, the Rebels, and ISIS/ISIL, who control up to a third of the Syrian territory.

There have been several severe human rights violations occurring in the violence, including massacres, bombings, and the use of chemical weapons.There are even reports of protesters and activists being imprisoned and tortured by the state.

The United Nations reported that 220,000 people have already been killed, although estimates rise as high as 330,381.

Al-Jazeerea estimates that 10.9million Syrians, or almost half the population, have been displaced. Over 4 million have become refugees, seeking out aid or protection from other Governments.

Until the pictures of the Syrian 3 year old went viral, Britain's stance had been reasonably passive. The press had been particularly unsympathetic to the movement of refugees, which makes their sudden display of compassion hard to swallow. The level of hypocrisy in the UK tabloids is such, that it was picked up by US media outlet Vox.

Until yesterday, Cameron's Syrian Vulnerable Persons relocation scheme had only taken in 216 Syrians since March 2014. This will be expanded to allow a further 4,000 refugees into the country, in no small part due to the increasing public pressure for more action. Scottish First minister Nicola Sturgeon wrote to Cameron informing him that Scotland would take 1,000 "as a starting point". Labour leader candidate Yvette Cooper suggested that the UK should take an extra 10,000 refugees.

While 10,000 is a large sounding number, the reality is a lot less dramatic. If every city and borough in the UK took in 10 refugee families, 10,000 is very achievable. Germany's Chancellor Angela Merkel said that she expected Germany will take in at least 800,000 asylum seekers this year.

Many think that the reason Britain, and the Government has been so unwilling to take on more refugees is our establishment's failure to make a distinction between immigrant and refugee, which, as explained above, are two different concepts. Cameron has been under pressure from his backbenchers, and especially UKIP, to curb the level of immigration, and taking in refugees would likely have been used as ammo by opponents to suggest he was failing to keep immigration under control. Thankfully, public opinion has removed his metaphorical concrete shoes, and now he can do the 'moral' thing.

It should be made clear that, although we were not taking in refugees, figures from The Daily Mailshow that the UK was the largest provider of aid to Syrian refugee camps, with £920m.

Although it is great news that the UK is finally stepping up to take more practical steps to relieve the levels of death faced by Syrian families, it will in no way be enough. There are many practical things you can do if you want to help. You can make a donation, or sign a petition, or write to your MP.

The Independent have a great list of ways you could make a difference to Syrian refugees. 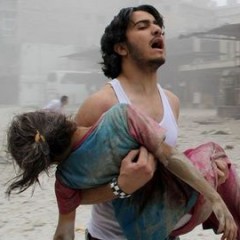 It definitely isn't about 'stealing jobs'