Please, Touch the Artwork is a quirky, experimental game that aims to bring art-lovers over to the idea of videogames as an art form.

Studio Waterzooi is a one-man gaming studio led (and entirely operated) by Thomas Waterzooi. Waterzooi (the man, not the company) previously worked as a gameplay and AI designer on Hitman and Divinity: Original Sin, before making the jump to solo indie game development back in 2018. The studio has done some work on interactive stories built around art and culture that push relaxation and tinkering around with interesting mechanics to the forefront, but Please, Touch the Artwork is their first big solo endeavour.

According to the Studio Waterzooi website, the project was inspired by a book by Will Gompertz called What Are You Looking At?. The book explores the idea of modern art, and tries to convince the reader about the form's value to society, encouraging them to consider the artists behind the work. In Dutch, Waterzooi's native language, the book's title was retranslated to My Little Sister Can Do This As Well: Why Modern Art is Art. Thomas Waterzooi already had an interest in modern art but the ideas in Gompertz' book gave him the idea of tinkering around with digital versions of Dutch painter Mondriaan's famous red, blue, and yellow compositions. He drummed up a random painting generator based on the aesthetics of his work, then added a puzzle element and Please, Touch the Artwork was born.

The game, as the title suggests, encourages the player to engage with modern art, and to an extent demystifies the form, making it more accessible. The mechanics shift throughout, sometimes the player must figure out how to fill in the colours of a painting, find enough letters to assemble a poem, or chase a blue square around the screen. The background music keeps the tone pliant with its jazzy sounds, able to stretch from relaxing ambience to tongue-in-cheek twists. It has so far received positive reviews from critics, and a considerable amount of attention from those who follow the indie-game scene.

Studio Waterzooi has a mission statement, one based off of Pietro Righi Riva’s manifesto Rejecta, which sets out a list of tenets that game designers must follow in order to create an artistic videogame experience for the player. The manifesto has some pretty strict guidelines, including limiting the game's run-time to two hours, and "in every country, never charge more than the equivalent of the price of a cheap meal." Riva is an Italian game designer who runs the indie studio Act of Play. He specialises in non-traditional gaming experiences and wrote the manifesto as a guide for any game designer wishing to do the same. Waterzooi agrees with the core message of Riva and wishes to "advance the medium in a certain direction that makes it interesting to people that are not normally interested in video games but have other interests such as art, culture, humanity..etc (or are interested but don’t find games about specific topics that interest them). We have to cater to these people and learn how to make games for them so games can eventually become the art-form it deserves to be."

For those wanting to try it out for themselves, Please, Touch the Artwork can be purchased here. 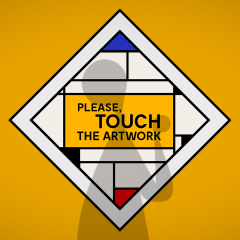 Please, Touch the Artwork is a quirky, experimental game that aims to bring art-lovers over to the idea of videogames as an art form.