Several of Tesco's distribution centres across the country will be impacted by the pay-rise motivated strike action.

Over 1000 Tesco warehouse workers and HGV drivers plan to participate in industrial action this December in a dispute over a proposed 4% pay rise. The pay rise, offered by Tesco to its distribution centre employees, is argued by Unite to be insufficient in keeping up with inflation, and can be viewed as a "real terms pay-cut." The current retail price index rate of inflation is 6%, which reveals a 2% disparity between Tesco's offering and the economic reality.

The action will take place in four locations — Antrim, Belfast, Didcot, and Doncaster. A further ballot is set to take place in the Livingston distribution centre to determine whether strike action should be taken there.

Workers participating in the strikes at Didcot and Doncaster will implement a 48-hour stoppage beginning at 06:00 on 16 December. Once this has taken place there will be a temporary pause to industrial action until 20 December, which will mark the beginning of five days of pre-Christmas stoppage. If a deal is not reached, the strike will continue past Christmas day, with another 48-hour stoppage on 30 December and a three day stoppage from 5 January onwards. Antrim and Belfast workers plan to begin an all-out continuous stoppage from 07:00 on 16 December.

Unite general secretary Sharon Graham said: "Our members have gone above and beyond the call of duty to keep Tesco's shelves filled throughout the pandemic. At the very least the UK's largest and wealthiest retailer should be making our members a decent pay offer."

Staff have already seen repercussions for their planned strikes. Tesco has stated to workers that employees who take part in strike action during their shift will not be paid, even if they work part of their hours. Additionally, all Christmas bonuses — amounting to £500 this year — will not be given to workers that take industrial action, despite the fact that Christmas bonuses are intended to reward employees for their efforts during the entire year.

A Tesco employee told The Mirror that "morale in Tesco both in stores and distribution sites is at an all time low, and now we receive letters threatening us not to speak to the press. If we vote to strike then we will lose the agreed bonuses we have worked so hard for — that's despite Tesco making billions throughout the pandemic."

Tesco have bemoaned the proposed strike plan. A spokesperson argued "our distribution colleagues have worked tirelessly through the pandemic in order to keep products moving for customers. The pay offer we have made is a fair recognition of this.

"We welcome the decision by our colleagues at the sites who have voted against industrial action. We are disappointed that some have voted to proceed, and we have contingency plans in place to help mitigate any impacts."

Tesco have doubled down on their proposed pay rise, saying that it is the highest increase awarded to distribution staff in the last 25 years.

Striking now will have the most impact on Tesco as the Christmas season is routinely the busiest time for retail; customers and stores alike may find delays to delivery as a result of the failed negotiations. Hundreds of thousands of Christmas delivery slots have been booked since November, any disruption is likely to have a widespread impact.

Unite regional officer George Brash emphasised the possibility of preventing the action, stating: “Even at this late stage, it is not too late for Tesco bosses to avoid severe disruption by making a greatly improved offer and returning to the negotiating table.” 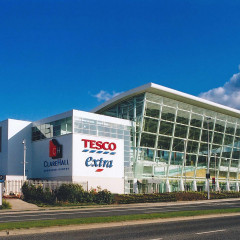 Tesco workers plan to strike on the run-up to Christmas

Several of Tesco's distribution centres across the country will be impacted by the pay-rise motivated strike action.