Teenage actress Kristina Hernandez made her debut in multi-award-winning short film, Stealth. We caught up with her to discuss art, gender, and her journey into acting.

When did you realise you had a talent for acting?

I've always had a flair for the dramatic! I started taking acting lessons when I was 6, and I've been involved in some local stage productions, but Stealth was my first film.

How did you first get involved with Stealth?

Stealth was my first break, the producer and director were searching for a transgender actress to play the part of Sammy, and they reached out through a Facebook group for the parents of transgender children. We saw the post and contacted them. Since we're in a different state, we had to record an audition video. They liked it and I got the part!

Did you know you wanted to do a film that was specifically about transgender teenage life?

I wasn't specifically searching for that kind of a part, but I feel lucky to have been able to do this film, and I would love to do other roles that portray what it is like to be a transgender teen.

How did you relate this film with your own life?

A lot of the scenes in the film happened to me in my own life, and many times during filming it felt less like I was acting and more like reality. I'm not very much like Sammy in terms of her personality, but I can definitely relate to the situations that she faced in the film.

How do you think the arts can help to highlight transgender stories?

Films allow us to put ourselves in someones shoes and feel what it is like to experience what they are going through. I think that Stealth helps people to understand that transgender kids are just regular kids who simply want to be accepted for who they are.

Do you think there is enough gender diversity in the arts currently?

I think that we are seeing more characters that are gender diverse on TV and in film, and there has been a lot of focus this year on transgender people. I hope that continues because it is helping to open people's minds to the reality that gender is a spectrum and not just male and female.

Which films or directors would you suggest to any young people wishing to get more of an education on transgender stories? 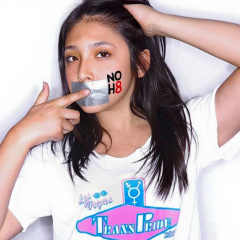 Teenage actress Kristina Hernandez made her debut in multi-award-winning short film, Stealth. We caught up with her to discuss art, gender, and her journey into acting.