We speak to Comfort Adeneye, creator of Top Wavers, about the inspiration and process behind the film.

Could you introduce yourselves and the film?

My name is Comfort Adeneye, a filmmaker from South East London. Top Wavers is a conversation between three black boys about their waves.

What was the creative process behind Top Wavers and what was shooting the film like?

Before shooting the film, I had watched so many waves videos on YouTube. There are hundreds on YouTube which were so interesting to watch and understand the dedication it takes to make your hair look good. Also, at the time I was listening to a lot of podcasts so listening to conversations all the time made me want to create my conversation. Shooting the film was fun, the cast and crew were amazing and it was easy to get along with everyone. It’s really important to have a good team behind you that encourages you every step of the way. At times it was quite overwhelming because it’s crazy to think everyone is here for that one little idea you had in your head. All in all, I’ll say it’s a very rewarding experience.

What were some of the inspirations for this film?

I drew inspiration from my general surroundings, seeing how passionate my friends get about specific conversation – especially with hair. A lot of the time we see women speak openly about how their hair makes them feel, so I wanted to review that from a male perspective, because hair does impact men the same way it does women.

Why did you decide to make this film focus on teenagers?

Being a teenager myself at the time, I wanted people to get a glimpse of the teenage mind – especially that of a black teenager. More often than not, black teenagers (particularly boys) are portrayed to be these unruly dangerous youths but in actuality, a lot of us are the opposite and when we are together it’s nothing but love and banter.

Who are your biggest creative inspirations and whose work did you take inspiration from for this film?

I’d say a lot of the first-generation Afro-Caribbean British creatives inspire me, not necessarily just filmmakers but across the board. Seeing what they’ve produced and how well they’ve done it gives me so much hope and drive for my future. For this film, in particular, I drew a lot of inspiration from things like Kidulthood by Noel Clark and Girlhood by Céline Sciamma. Both of these films have a running theme of strong bonds between black teenagers that I wanted to portray in my film too.

I’d say look for as many opportunities as possible, even if you see opportunities you feel like you’re not ready for, still apply anyway. There’s no harm in trying, you can do anything you put your mind to. Before starting I wish I was told to congratulate myself for the work I’ve produced, it’s really easy to be hard on yourself because you feel like what you’ve made isn’t great, but everyone has to start somewhere and you should be proud of every step!

You can find me on Instagram @_comfortt and connect with me on the dots, Comfort Adeneye

We also reviewed Top Wavers and you can read our thoughts on it here. 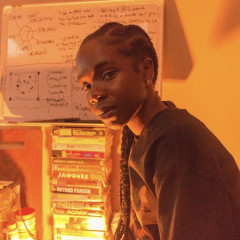 We speak to Comfort Adeneye, creator of Top Wavers, about the inspiration and process behind the film.