Voice MagInterviewsWhat goes on at Skin…

"We are an intersectional feminist theatre company and all our work contributes to the conversation around achieving gender equality."

I’m Mel, One half of Jordan & Skinner and performer.

What happens at your organisation?

We make theatre, engagement projects and street theatre.  We are an intersectional feminist theatre company and all our work contributes to the conversation around achieving gender equality.

We make theatre productions that are aimed at young audiences and we also create hands on participatory projects with young people which allow them to engage creatively with the ideas in our work. Sometimes we all make work with young people, such as earlier this year we made a street parade to celebrate International Women’s Day called Don’t Let Anyone Dull Your Sparkle. Young people and adult got involved in creating costumes, banners, music and dance to celebrate women and girls in the area and we performed marching through the Ferguslie Park estate in Paisley.

What activities were most popular for young people and why?

I think the workshops were more popular than performing. It felt like young people wanted a safe space to be creative, to be themselves and to share with each other. Performing and sharing that in public was something we had to build up to.

Could you give an example of a recent project you have run, and the impact it had?

We have been holding workshops with young people to explore themes for our next production The Time Machine: A Radical Feminist Retelling from the End of the World. This has probably had a bigger impact on us than the young people so far but we have been talking about the future of the human race and it has been so interesting to hear what people think about that. We have a really interesting relationship with the future at the moment because of the climate crisis so we are looking at ways we can do something really meaningful with young people in the next phase of the project.

Do you run Arts Award?  If so, what do you offer and how can young people get involved?

Because we are a Scottish company we are not involved in Arts Award bit its sounds great and I wish we had something like that here!

We have a website: jordanandskinner.com and are on the socials:

You should also check out our Want my job? interview with Caitlin Skinner, the other half of Jordan & Skinner. 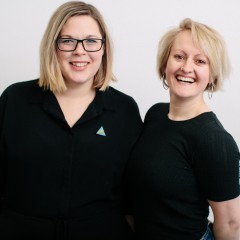 What goes on at Skinner & Jordan

"We are an intersectional feminist theatre company and all our work contributes to the conversation around achieving gender equality."