"We create work which attempts to answer questions which we can’t find easy answers to and yes, these questions reflect what’s going on in the world around us."

Not what we expected we’d make. We started off retelling fairytales. We ended up with a drag clown riot. It’s bonkers, touching and ridiculous.

Deep rooted masochism and a reckless disregard for our mental health… and to be able to perform the show for a whole month in a city built on a volcano.

Sheer size, diversity of shows, the people you meet, the time you spend with them, the intensity. And of course Edinburgh itself, this crazy beautiful mad Escher painting of a city. And the deep fried macaroni cheese pizza pies, they are very special indeed.

Have we entered the industry? I thought we were just gatecrashing it.

Shit Theatre, Trygve Wakenshaw, Bryony Kimmings, Split Britches, Philippe Genty, Carl Jung, Laurie Anderson, Grace Jones. We’ve yet to make something which incorporates all these influences but we remain hopeful that it can be done.

Michelle: Trying and failing to be a spy,

Michelle: An astronaut or a beekeeper .. or preferably both at the same time. Bees on the moon.

Michelle: I went to see a live theatre version of the Sooty Show when I was about five. It was a high art spectacular and hugely influential.

Lizzy: Panto at the Alban Arena- the dame threw toilet paper at my mum - I thought this was brilliant and I wanted to be the principal boy.

We create work which attempts to answer questions which we can’t find easy answers to and yes, these questions reflect what’s going on in the world around us. But we ask and answer questions by playing with what’s real and what’s not. You won’t find any headlines scripted into the show but we deliberately leave a lot of the spoken parts of the show open which means we can respond to what’s in the room or what’s happening in the world on any given day.

The questions we ask in the show about gendered stories and why we accept them came up around the time that the #MeToo movement was gaining traction. Why do women become invisible after a certain age? Why do we feel empowered in every aspect of our lives apart from our relationships with men? But the real shift in public sentiment has been much wider - it feels like there’s a wholesale questioning of the very way we have lived for centuries. What’s success? What’s growth? What does living happily ever after mean? In the face of what’s facing us politically and environmentally and technologically we need to question everything and be open to new stories - and that’s what the show is about.

Anita Berber - she was a naked Weimar era cabaret performer who ate rose petals soaked in ether and smacked a champagne bottle over the head of a rowdy punter. I’d convince her to apply her revolutionary performance style to the revolution.

Why would a performer opt to do either a ticketed event or participate in the free fringe?

Ticketed events still, unfortunately, tend to be taken more seriously by reviewers and ‘the industry’ who like to book up their Fringe months in advance. This means if you have a free fringe show it can slip under the radar, but I think the free fringe is where the real spirit of the festival still exists. What’s fringe about selling £18 tickets to a show in a 100 seater venue?

What are the benefits and limitations of both?

Taking a show to a big name ticketed venue has status, visibility and you’re likely to get a bit more technical and marketing support. A bit. The free fringe isn’t corporate - it is a voluntary community and has an incredible feeling to it. But venues can be quite limited. Then there’s always the option of finding your own crazy venue somewhere which appeals to me a lot, we’re on the hunt for a stage on a canal boat for next year or an underground bunker. Or we could turn Lizzy’s van into a boutique stage-let.

Live in the city, not just at the festival - Edinburgh is a beautiful place, swim, run, play cricket on the meadows, spend time with the brilliant people you meet which is not work related, eat well and enjoy yourself. It’s a huge outlay of time and money but can be an incredible experience if you see it as a month to learn and live. And follow the crones… once in a lifetime experience #edinblairwitchproject.

15:40 at the SpeigelYurt, Potterrow Underpass with the excellent humans of Heroes of the Fringe. We also have a late night party on the 14th at the SpiegelYurt - it’s the summer Office BBQ for People Who Don’t Have An Office - hosted by Danly Steele and Shyrl Kyle and featuring live shredding, appraisals, awards and live corporate cabaret from some of the most bizarre and brilliant acts of the Fringe. 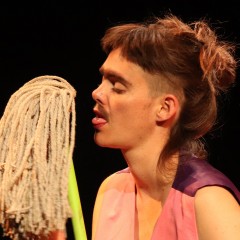 "We create work which attempts to answer questions which we can’t find easy answers to and yes, these questions reflect what’s going on in the world around us."