"Since I started stand-up comedy, I can feel the change in comedy industry, slowly but steadily. It’s very exciting to be in and witnessing the moment."

My name is Yuriko Kotani, I was born and raised in Japan. I’ve been living in the UK for over 10 years. I’m a stand-up comedian and winner of BBC New Comedy Award in 2015!

How would you describe your show

In Japan, we have a proverb “The nail that sticks out gets hammered down”. The show is about my journey to find my own voice through learning and experiencing cultural differences and embracing my individuality.

I also talk about racism, sexism and love.

It’s the biggest art festival in the world and it will be a fantastic experience, by the end of the Fringe, you get better as a comedian. I have gone to the Edinburgh Fringe every year since I started stand up and have seen many shows. I was absolutely inspired by them and it became one of my goal to have my own full hour show at the festival, which is happening this year and I’m very excited about it.

The amount of shows is phenomenal, especially comedy shows. I’ve never seen any festivals like that before. Lots of shows are on every day for the whole month, using all the spaces you could imagine. From a small room to a huge theatre, pubs, bars, restaurants, night clubs, karaoke box, bus - they turn into comedy venues. I did my own show on top of a double decker bus called Blundabus last year and it was really fun. Edinburgh Fringe is a comedy wonderland - you might stumble across amazing shows that you didn’t know about!

I love British comedy. When I came to the UK, I was shown The League of Gentlemen DVDs and it blew my mind as I’ve never seen anything like that before. I then started to watch more British comedies and I became a British comedy fan and wanted to be a part of the scene.

I guess still being a comedian.

I would still want to be a comedian.

One of the strongest childhood art memories is ‘manga’ (comic books).

When I was a kid, I used to read a lot of manga and I remember one of my childhood dreams was to be a manga artist. At my primary school, there was a Manga Club and I enjoyed drawing manga there as well as at home.

Being a comedian, you have to be funny first. Writing jokes is not easy especially if you have only a short amount of time, but I love doing it and when it works I get such a rewarding feeling - especially if it’s about something important to me or makes me feel strongly about.

I talk about racism and sexism (and love) in my show, but since I started stand-up comedy, I can feel the change in comedy industry, slowly but steadily. It’s very exciting to be in and witnessing the moment. I’m learning everyday too and that’s all come from comedians and industry’s effort. Without it, this change isn’t happening.

Overwork in Progress towards Edinburgh!

Me in the past. I want to work with her and tell her that you can do this! Believe in yourself, don’t worry about what ‘hammers’ would say. Everything is gonna be OK - have fun with your imagination and creativity!

This year, it’s my first time I do my solo show at ticketed venue at Edinburgh Fringe so I will find it out! One thing I’m sure is I’m not doing a bucket speech at the end of the show this year. (If I do it at a ticketed show, that would be weird. Or maybe I’ll do it anyway for a laugh!)

Do it! But first, come and visit. Have a look around. Watch shows. Do some spots. Enjoy the city.

You can see my show at 7pm everyday (except Monday the 12th) at Pleasance Courtyard, The Attic.

You can find me on social media and my website! 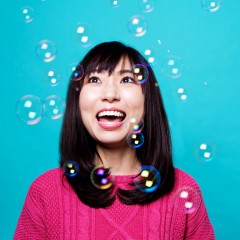 "Since I started stand-up comedy, I can feel the change in comedy industry, slowly but steadily. It’s very exciting to be in and witnessing the moment."