Eliza von Poppins presents... A Practically Perfect Guide to Living debuts at Brighton Fringe this May. Creator and performer Rosie Williamson gives us an insight into her show.

Could you first introduce yourself to the reader
My name is Rosie Williamson and I am a singer-actress-singing teacher-theatre creative-cabaret producer-writer or creative ‘jack of all trades’! I write, produce and host “What Would Julie Do?”: cabarets and a blog which combines self-help and show tunes; taking inspiration from Julie Andrews and a few of my favourite things! I am bringing my spin off solo show Eliza von Poppins presents…A Practically Perfect Guide to Living to Brighton Fringe from 23-27 May.

Describe your show/what is your show about?
Eliza von Poppins is a Julie Andrews worshipping, show-tune fuelled life coach who is determined to help you solve your problems and become practically perfect in every way. The audience are invited to think about what would be “loverley” for them (like My Fair Lady’s Eliza Doolittle); find the fun (à la Mary Poppins) and help write a new version of “My Favourite Things” (like Maria von Trapp in The Sound of Music). Unfortunately, Eliza’s talking parrot umbrella starts to cause havoc and we start to wonder if Ms. von Poppins is really who she says she is?! The show explores grief and perfectionism with subversive takes on classic Julie Andrews’ songs and asks “How do you solve a problem like self-loathing?”.

What inspired you to create this show?
I’ve always loved Julie Andrews and have often been compared to her… My secondary school form tutor wrote in my leavers’ year book that I was “just like Mary Poppins”!!! Shortly after I finished my musical theatre training when I was feeling a bit blue and frustrated, I remember saying to my singing teacher: “I want to play all the classic roles Julie Andrews played!” and she said “Well, why don’t you do a tribute act or something?”. My initial thought was “Absolutely NOT!”: too cheesy and how on earth could I do Julie justice by impersonating her?! I couldn’t. But  a few days later, I had an idea! What if I looked to Julie Andrews for inspiration to navigate my life in my late 20s. When I felt stuck… I asked myself “What Would Julie Do?”.

I started writing the What Would Julie Do? blog in 2016 taking hypothetical advice from Julie Andrews quotes and song lyrics and had the idea of writing a one woman show but was a bit scared to venture out on my own straight away. I got a group of friends together and put on the first What Would Julie Do? cabaret which was themed around using show tunes as self-help and included my rewrite of “A Spoonful of Sugar”. Since then, I’ve produced and hosted six more cabarets in London with emerging musical theatre performers and West End stars and they have been really well received.

I pitched my idea for the solo show to the Actor’s Centre/Tristan Bates Theatre last year and was selected to be part of their work in progress John Thaw Initiative Mental Health Season. I was lucky to find an amazing director, Courtney Larkin, and continue my collaboration with musical director, Matthew Samer, and we presented a workshop showing at the Tristan Bates Studio theatre in London last June. We’ve revised and developed the show quite a bit since then and are very excited to be bringing the full production to Brighton Fringe for its debut!

What is it about Julie Andrews that you love so much?
Where do I start?! There’s a lot of love for Julie (some very much of the ‘tongue in cheek’ variety) in the show but the heart of what I love about her is grace, generosity and resilience. Alongside the highlights that we all know and love her for: She had to deal with a very difficult childhood, divorce, bereavement and losing her singing voice… as well as various professional projects that haven’t gone to plan and plenty of people judging and putting her down. Despite this, at the age of 83, she is still living a full and active life; as a children’s book author, star of her own Netflix children’s series and directing musicals.

I also love that she always seems to have a spoonful of polite sass to help the medicine go down!

What do you love about musical theatre?
I could go on forever…but I’ll keep it brief… The storytelling through song, the spectacle, the craft and the community.

Have you always wanted to be a performer?
Yes! I wanted to be a ballet dancer when I was little and then got into singing and musical theatre at secondary school. My Dad was a singer and singing teacher and I followed in his footsteps; training and working as a classical singer quite a few years, but the love of showtunes (which Dad had helped foster in me) was strong so I ended up training in musical theatre at the grand old age of 27 going on 28!

Have you performed at a fringe festival before? If so, what do you enjoy most about fringe festivals?
No! Brighton will be my fringe performing debut. Very exciting! I’ve been to fringe festivals as an audience member before and love the huge variety of shows you can see… some of which have provided inspiration for my own work! I’m really looking forward to being part of the Brighton Fringe community at the Warren and around the city and I can’t wait to see lots of other people’s shows too!

What advice would you give to young people who want to get in to musical theatre?
I’ll give you a bit of Julie Andrews’ advice! She says: “Work hard, apply yourself and be ready. When an opportunity comes you can grab it”.

I would add that these days you shouldn’t shy away from making your own opportunities. Listen to and learn from everyone you get to work with. Keep “finding the fun” and remember that this job really is a game…so play!! Oh and… “Climb every mountain, until you find your dream”… but remember the climbing is the dream! 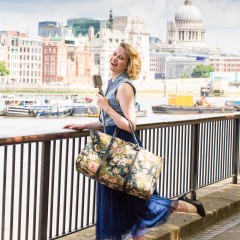 Eliza von Poppins presents... A Practically Perfect Guide to Living debuts at Brighton Fringe this May. Creator and performer Rosie Williamson gives us an insight into her show.