With women at the heart of her stories, Charlotte runs the successful Sheer Height Productions. What else does she do?

Hello, I’m Charlotte and I am an actor and co-founder/producer of Sheer Height Productions. We create theatre and film that have women’s stories at their core.

With Sheer Height my day-to-day varies depending on which project we’re working on.  At the moment we’re in pre-production for a film. This involves a lot of admin work such as budgeting, scheduling, sourcing film locations and fundraising.  However we also get to do the more fun bits such as meeting potential crew, creative planning and script development.

On the theatre side we have just finished a Research and Development period for a new play.  This involved working closely with a director and the writer to develop the play through a series of workshops, ending in a rehearsed reading for industry professionals.

Working with so many amazing people! We’re lucky to have collaborated with over 200 directors, actors, writers and crew since we formed the company four years ago.

Another perk is working with Jenny, who is my co-producer/co-founder of Sheer Height. We have a really good working relationship whether we’re producing, writing or acting together. We have similar creative aims for the company, and are good at challenging each other in order to enhance the potential of each project as best we can.

It’s very difficult to finance a project which can be stressful. I also don’t particularly enjoy the more mundane admin tasks such as risk assessments and GDPR!

With Sheer Height it’s been running our women’s theatre festival, Women Redressed, which we’ve produced five times at some lovely venues across London including Park Theatre, Arcola Theatre and the Jermyn Street.  The festival presents theatre that tells stories about women, puts female characters at the forefront and challenges perceptions and expectations of gender.

I studied English and History at university where I performed in a lot of plays with the drama society. I then trained as an actor at Drama Centre and founded Sheer Height one year after graduating.  Alongside Sheer Height I currently work for a film production company who are developing a television series. I approached this company as I want to get more experience in production, but also need flexible hours to fit in with my other work, which luckily suits them too.

I’ve had many other jobs outside of the arts!  I’ve worked as a supply teacher, an office assistant, a retail assistant, a waitress, a babysitter…and there are probably many more. As an actor you go through a lot of day jobs which I think is a useful thing because it gives you insight into lots of different worlds.

When I first left drama school I really struggled with the work-life balance. As an actor or any sort of freelancer you feel like you are constantly waiting for a job and are terrified of losing work.  This often made me put plans on hold and stopped me from ‘living’. It took some time to work out how to achieve a better balance, which meant prioritising certain things that made me happy and focusing in on what I really wanted to achieve in my career.  I think I have a much better balance now but it is a constant juggling act.

I’ve noticed that a lot more people are making their own work and taking charge of their careers now which is exciting.  It also seems that people are trying out different roles more and more - a lot of actors I know write or direct, and vice versa.  I think this is great as it keeps your creative juices flowing and opens up opportunities.  We don’t have to confine ourselves to one area in this industry – we can multirole and continually expand our skillset.

I’d tell myself to not be scared to voice my opinion, because everyone’s opinion is important and valuable.  It’s fine to be shy or modest, I don’t believe you have to be an extrovert to get along in this industry, but try to keep faith in yourself and your abilities.

If you have an idea for a project then just go for it and make it, don’t wait for the work to come to you.  Don’t be scared of failing – if a project doesn’t work out as you expected it to then it was still an experience and a learning curve, and those lessons will contribute to the success of something later on down the line.  Also remember it’s a long game – be patient and work hard - things will start to happen!

Want more tips on working in the arts? Head on over to Creative Choices, a website filled to the brim with advice on how to get into the arts. 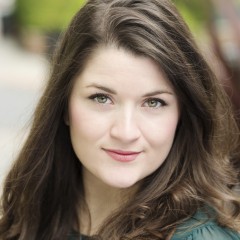 With women at the heart of her stories, Charlotte runs the successful Sheer Height Productions. What else does she do?