Gillian Cosgriff takes some time to talk to Voice about the show, inspirations, and to give advice to young people.

Hi there! I'm a musical comedian from Melbourne, Australia.

It's a show about my fear of space and my fear of marriage. Also of moths. Moths are terrifying. What are they even made of? DUST?

It's the biggest Fringe in the world. I love knowing that the whole city is filled with artists and audiences from all over the place. Also, the crepes are very good.

The scale is HUGE in comparison to other fringes. Also, better crepes.

This is only my second Edinburgh Fringe, but I think any festival changes and shifts over the years – especially one that's open access.

I was a bossy child who liked attention – so really I think my parents are to blame for encouraging this behaviour. I always wanted to be in musicals but after studying music theatre I was more interested in the cabaret/comedy side of performing. I'm inspired by people like Tim Minchin, Eddie Perfect, Kate Miller-Heidke, and Meow Meow.

Eating cereal and watching RuPaul's Drag Race. Oh wait. What other job would I be doing? Um…is there a position available to eat cereal and watch TV? I'm VERY qualified.

At primary school we did Joseph And The Technicolour Dreamcoat. I played the role of Green. My performance was integral to the coat's colour scheme.

Mostly I talk about things that I find interesting and hope that the audience does too. I do feel pressure to keep material relevant to what's going on in the world, but I try and keep things universal enough that they don't need constant updating. I'm much too lazy for that.

I feel that the world is in a weird state of flux right now. In my show I talk a lot about things that I'm afraid of and things that I don't fully understand, because I think there's a lot of humour in that. More than ever I feel like making comedy about things that terrify you is a good way to take back some power.

The benefits of the free fringe are that you don't usually pay venue hire or ticketing fees and you can pass the bucket around at the end. Generally free fringe venues are quite basic – usually a stage and a microphone (although some venues are a little fancier). If you're good at your end of show spiel you might make a decent amount of cash with a free show. The benefits of a ticketed event are that your venue hire fees generally cover some lighting/sound/tech/front of house staff that you might not have with a free show, and you're making money from a set ticket price. There's pros and cons to both, just depends what kind of show you're doing.

Gillian Cosgriff: To the Moon and Back is performing at The Gilded Balloon at 21:00 on 2nd – 27th (not 15). For tickets and more information visit the Ed Fringe website. 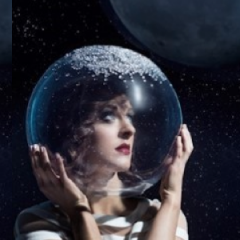 Gillian Cosgriff takes some time to talk to Voice about the show, inspirations, and to give advice to young people.