Stuart Black takes some time to talk to Voice about the show, inspirations, and to give advice to young people.

Hey reader, I'm Stuart Black. My twitter handle is @stuartvanblack. I'm not Dutch, I just used to live in a van. Much like Jean Claude Damme, Eddie Halen, and Morrison.

I've been performing at the fringe for 12 years, it would be crazy to stop now that I've got the experience to do a great show.

It's huge. If you haven't been before just believe me. Huuuuuuuuge. There's a unique energy about the Edinburgh fringe. There's stuff happening 20hrs a day. It would be 24 but people gotta sleep.

The open-door police means it seems to get bigger every year. Even though I'm a comedian I sometimes think that stand up comedy is a bit too dominant at the Fringe. Of course, I love comedy, but I love other art forms too. We're all competing for ticket sales, but it costs way more to put on theatre. That's another reason why I like being on stage at 11.40pm, I'm not taking bums from theatre seats.

I was 32 before I started. It never occurred to me I could be a comic. But that all changed when I started seeing American comedians whose material was stories about their f*cked-up lives, and I've had a f*cked-up life so the penny dropped. I realised I had tons of material right there in the memory banks. So I gave it a go.

You know that show: Dog Whisper, with Caesar Milan. I love that show. I'd be working on that. I'd be on that show. They call him the Dog Whisperer because during the advert-break he whispers to the producer: "Get the ketamine". Then suddenly the angry dog is at his feet for a belly rub. I'd be the guy the producer sends to get the tranqs, or coffee for Caesar, or pick up the turds. Actually, scratch that, I'd be a roadie for Nick Cave.

I'm already doing it. I just want to be a stand-up comedian.

I was eight years old and I won an art competition at my school fete. It never occurred to me that I'd do well so I didn't even turn up for the results. I found out later. My mum still has the picture in her attic. (In case you're wondering… it's total crap.)

I always have some social comment, it's part of what I do. But these days, the news moves so fast you really have to keep up. I've had to ditch ten minutes from this show simply because all of those stories have changed so much, those routines just weren't relevant anymore. Sometimes I just go more personal and you hardly get any politics. Sometimes people are sick of hearing it and just want a laugh.

Not so much. My comedy isn't mainstream so most people didn't get me before… and they still don't now. But over the years I've grown a small niche fan base. They're a little band of dark-hearted stragglers who get it.

Wow that's hard. I think the best thing I've ever seen live was Cillian Murphy in Misterman at the National. I'd give anything to have been involved in that. But seeing as the question is so wide open, I'll be a bit more adventurous… I wish I could have helped Stanley Kubrik with the editing of 2001. I'd cut it way down. I'd speed up that first half. If you're a purist, and love the original, bear in mind we are talking about time-travel here, so my shorter version would actually be the original version, and you'd still love it. Trust me.

Stuart Black: It's the End of the World as We Know It is performing at Just the Tonic at The Tron at 23:40 on 3rd – 27th (not 14th). For tickets and more information visit the Ed Fringe website. 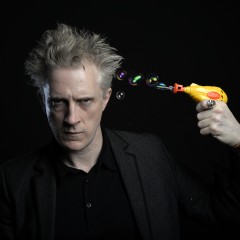 Stuart Black takes some time to talk to Voice about the show, inspirations, and to give advice to young people.