From Random Acts Midlands, Ben Norris's Send Her Victorious was one of the most daring films made as part of the 2017 cohort for, as we've learnt, some of the most essential reasons for today.

Fill in an application form, which includes outlining the film you'd like to make, in whatever detail you can based on the stage it's at - any collaborators already on board, or who you might like to approach - give examples of previous work, in film or elsewhere.

The idea came from how few sympathetic right-wing characters we seen in film and television, or on stage. I don't agree with any of Jaye's views, but certainly he is not alone - there are people like Jaye in this country and abroad, drag queen or not, whose Islamophobic views persist, even if they're not shared in the film industry, so I wanted to begin to try and explore that. To examine what might get someone to that point. Whether or not I'm the right person to do this, as a liberal, white, heterosexual man, is a different question, but I wanted to explore it because I feel it needs exploring. We are in such a critical social moment, post-Brexit, post-Drumpf, where we need to try and understand each other and encourage genuine connections and empathy - not simply tolerance where tolerance means endurance - which is increasingly wearing threadbare. I wanted to say 'here is a character who is three-dimensional, who is hurting, who is real, and whose views and actions - in their own mind at least - are justified and right'. There isn't a lot of genuinely challenging left-wing television being made because right-wing characters are so often reductive stereotypes whose views are easily dismissible, which doesn't help progress the conversation at all.

So impossible! Recently I've really enjoyed Her, Room, and Birdman, to name but a few. And Four Lions is a lasting favourite.

I'm writing a new stage play, and developing some narrative poems for Radio 4.

The support of a production company, an insight into making film professionally and the film industry itself, and excellent exposure through Channel 4's mini-site and all the Random Acts contacts.

What, if any, discussion did you hope to bring about with Send Her Victorious?

The co-existence of intolerances within minority groups was the biggest thing I wanted to explore - the fact that oppressed or marginalised groups, in this case LGBTQ+ and British Asians, don't necessarily have a default sympathy for one another simply through oppression, because their experience of that oppression will be wholly different. You often find that some of the most vehement acrimoniousness is between different minority groups. In a very different way, Pride addresses this issue; threatened mining communities of rural Wales and marginalised LGBT communities initially didn't see much common ground, until they discovered and then united against a common enemy. I suppose the ultimate ambition, societal and within the world of Send Her Victorious, is to find that common goal and enemy, and unite in defeating it. In hindsight it was an enormously ambitious idea to try and fit into three minutes, but I'm proud of the attempt - it's a start, and I want to explore it more, with a longer piece.

Have you been worried about the reaction that has/could come from this film? Does scepticism of political correctness come into play?

I have no scepticism of political correctness. When people say 'political correctness has gone mad' they are really saying 'I can't say the things I used to say anymore', or - beyond that - 'I am prepared to be tolerant only when it suits my definition of tolerance', which is to say that people can't accept being told they are being offensive by the offended, who are in a better position to define what they find offensive, let's be honest! So my only real concerns were that the brevity of the film would prevent us from exploring the topic in the depth it requires (probably allowed, ultimately, by feature length!) and that it would instead seem half-baked or naïve.

I did an awful lot of research into drag culture, Islamophobia in the UK, and how that relates to LGBTQ+ people. One of the most interesting things I discovered was the existence of an LGBT division within the EDL. This forced me to challenge my own preconceptions about the English right, who I assumed would all be homophobic. There is still vile homophobia in the EDL, but it seems that people were prepared to overlook their reservations about sexuality in their shared opposition of the 'Islamisation' of the UK, so vehement is their racism. This shows that difference can be overlooked in the face of a greater concern. It's just a shame that this concern is - in my opinion at least - totally misguided.

What would you offer to someone were they to say that Jaye's actions were justified?

I would say that Jaye is clearly dealing with a major trauma from his youth, which is completely tied in with his identity now as an adult gay man, but that this does not justify his actions against a different person purely because they superficially share some physical similarities. It isn't even right to blame his childhood friend for this. Everything should be contextualised. Of course, it is easy to answer this question from a distant and reasoned position, but what I think Jaye should do is: talk to someone about his childhood experiences (probably a psychological professional, like a therapist), and also engage in a meaningful way with the debate about homophobia within Islamic culture, helping to foster a culture of understanding and love in both directions.

The biggest challenge was cutting the first draft of the script (15-ish pages!) down to three minutes, and losing some essential nuance in the process. Also, shooting in three locations in two days meant we were extremely pushed for time, but it was a great lesson in how to strike a set quickly, and also chasing the right lighting conditions for each scene (natural and artificial).

I hope so. Every generation of artists, filmmakers included, has a responsibility to tell stories that haven't been told before, or tell old stories in new ways, and to interrogate the world we live in - things we ought to look more closely at, things we should celebrate, and things we should dismantle.

Tell us about how the main character was formed – where they synthesised or based somewhat on a real person?

It was a product of my research. I couldn't find any examples of publicly racist drag queens, so it was a fictional synthesis of people, opinions and lifestyles.

What additions or changes would you make if you were allowed more time? Would you offer a come-full-circle lesson of redemption for Jaye?

Absolutely. I think ultimately I'd like to make a feature length film or TV drama, exploring Jaye in relation to a drag queen from the 'Gaysian' community - beginning with their initial friction and telling a redemptive story, for both of them, as their views are challenged and shift, and as they become closer. 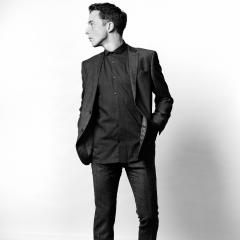 From Random Acts Midlands, Ben Norris's Send Her Victorious was one of the most daring films made as part of the 2017 cohort for, as we've learnt, some of the most essential reasons for today.