Voice MagInterviewsThe cast of the Spoo…

I attended the Spooky Library Sleepover, in the evening. The mystery trail was very interactive, during the trail there were three characters to meet. These include Dracula, Medusa and a Sleeping Mummy.

When the young people were getting to know characters, they each had an activity to complete i.e. compliment tins, colouring in sunglasses and writing hieroglyphic messages.

The participants hot seated the actors.

Q: "Tell us about your work after Gold Arts Award."
A: "Apart from my completing my Gold, I've had more experiences to take lead on Drama workshops like The Belongings."

Q: "Who inspires you?"
A: "It was my Nan as she told me growing up always to believe in myself."

Q: " Who would be your favourite spoken word artist?"
A: "I take inspiration from Watsky as there's deep meaning in his work that I can relate to."

Q: "What are your main skills?"
A: "I have web design/photography/graphic design that helped along side Nubi."

Q: "What was it like managing your first event with WIP?"
A: "It was amazing, I am so glad I had the opportunity to do it."

Q: "What is one of your favourite characters you've played."
A: "It would have to be the creepy school girl from The Belonging play."

Check out the promo video I created for the sleepover. 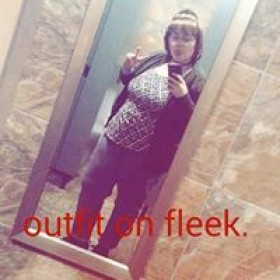 Hey there, I'm Hannah. First of all I am Arts Award Artivist with AA Youth Network, so you'll see a lot of me on the AA Voice website.

Five things about me:
1. I am a photographer + Filmmaker
2. I love to watch films in my spare time
3. Favourite TV programme is Big Bang Therory 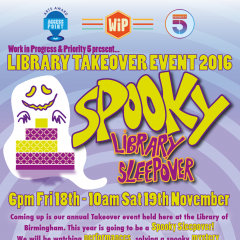 The cast of the Spooky Library Sleepover by Work In Progress

I attended the Spooky Library Sleepover, in the evening. The mystery trail was very interactive, during the trail there were three characters to meet. These include Dracula, Medusa and a Sleeping Mummy.