From Random Acts Midlands, Thomas Chimiak's visual poem, Vocal Barriers, is a statement on the role of technology in our society. He shared with us his experiences about the Random Acts project.

Originally I saw the call for 16-24-year-old filmmakers in the Midlands and relished the challenge of working on a budget and with such a short film duration. I decided to submit a video application so my passion for the project can be demonstrated as well as being able to showcase previous work and inspirations.

Vocal Barriers' origins can be seen since doing my Masters in Fine Art a few years ago I have been exploring the use of technology in terms of social interaction especially utilising my high-functioning autism and how I avoid society when I can. The book, Alone Together by Sherry Turkle heavily inspired Vocal Barriers as it was discussing how much we actually interact online rather than in a physical space. In addition, within the last few years of my freelance work I have been very much involved in the Birmingham poetry scene and I wanted to combine the two loves - technology's effect on society whilst using poetry to enforce the message.

I work under the ethos similar to Jeremy Deller where I collaborate with fellow creatives to try and create a more universal message through a variety of mediums so for Vocal Barriers working with musician Jake Alder and poet Jess Davies. Also I featured in the film as it is semi biographical in regards to my opinions towards technology's use in society.

My favourite film varies depending on mood and who I am speaking to but I guess a top three favourite films would be Derek Jarman's Jubilee, Pan's Labyrinth and The Neon Demon. I love visual experimental storytelling which makes me invest in the characters involved as well as presenting something I have never seen or experienced before.

What projects are you working on at the moment following this release?

Apart from promoting and sending Vocal Barriers to film festivals I am also developing another barrier based film this time purely set within vehicles as these also act as a barrier to social interaction. I much prefer taking my car places as it is my own bubble rather than public transport and this coupled with a live diegetic soundtrack is what I hope to explore in my next short film.

For me this scheme encouraged and helped me to work with fellow industry professionals to increase the standard of production and understand the financial and creative decisions typically needed to be made when making a film not funded by yourself. It was a chance to work as purely just the director for the first time because I typically shoot my own films but being able to focus on performances and the overall production really furthered my skills as a filmmaker.

What inspired the backing track?

The backing track was inspired by two aspects – the first being Lorde's A World Alone song which has a similar minimal effect I was looking for with the track and the second aspect was my composer Jake Alder, who I frequently collaborate with, just brought a drum pad so I wanted to utilise that visually and sonically.

We had frequent meetings either in person or over the phone with our production managers to check the development of the film and me and the poet met a few times to redraft and talk through the original idea.

What was the shooting process like in the venue?

The shooting process was intense as everything was crammed into a day shoot and we had three different setups to cover and dress the room with props and lighting. We viewed each person, the musician, the poet and iPad man as three different films that interweaved between one another. I believe I shoot quite differently to most as I do not have a shot list because I would much rather create shots in the intended space and in the moment. I try and film fiction films, which this is, in a documentary style almost as though it is occurring in the location and you just happened to be watching.

The hardest part for me was not limiting my creative ideas if budget was a problem and thinking of creative solutions to overcome it. For example, I originally wanted a 360 degree circular track but once I realised this was not possible due to time and money I had to rethink the shot styles and hire a Ronin in instead which does a similar camera movement.

What advice do you have to give to people thinking about applying for Random Acts to help them as filmmakers?

If you are passionate about becoming a filmmaker or creating your vision on screen you should apply, plain and simple!

Some young people find it increasingly hard to pay attention to a feature-length film; do you think short films are the way forward?

I think short films document your skills in a short space of time and shows off what you can do with a limited budget and duration. In regards to attention span everyone is consuming media faster and I know I give more time to watch YouTube or Vimeo videos than I do feature films and this is sad trend but ultimately I think for a quick impact short films are really useful. My film could not be a feature fiction film given the topic as it suits a quicker message and I think the younger audience is quite cut throat these days as they want to know instantly why they should give this time and not watch thousands more hours of alternative content out there. 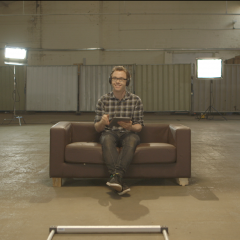 From Random Acts Midlands, Thomas Chimiak's visual poem, Vocal Barriers, is a statement on the role of technology in our society. He shared with us his experiences about the Random Acts project.