From Random Acts Midlands, Danni Spooner's evocative short film, FAG, is a telling development of ideas around gender. She gave us her perspective on the Random Acts program, and what went into making the film. Read our review here

What did you have to do to get onto Random Acts?

Apply to Rural Media's call out for Random Acts. I sent in a link to my Vimeo with examples of my work, including some pieces I made at De Montfort University called 'Cis-Neutral' which was a piece of work that I wanted to develop. I sent a file of myself talking about what I wanted to do - this was instead of a written application. I got a call from Grant at Rural, and he asked me to still develop my ideas behind 'Cis-Neutral' but think of a completely new piece of work. I got a Keynote presentation together of two ideas surrounding gender and sent them over within a few days. Grant gave me a call back and BAM I got it!

I studied dance for screen in my final year of university, in which I made 'Cis-Neutral' which focused on the gender identity and gender expression of two dancers (myself and Mac Palima). I knew I wanted to develop this further but wasn't sure how to at first. After Grant called me, I was sat in my mum's kitchen with my girlfriend and I started blabbing on about having three to five androgynous creatures just walking in space. I instantly wanted them to have Keiji Haino hair and for the whole thing to be mainly monochrome. Then I began drawing these creatures, getting really excited and began to structure my ideas in my Keynote presentation.

What inspired your idea for the film and your minimal approach?

I think my minimal approach is inspired by The Holy Mountain (1973) by Alejandro Jodorowsky. This isn't because the film itself is entirely minimal, but it made me aware of the significance of imagery and what that can mean within film. This awareness was also played with in my previous work 'Cis-neutral' so I had a year's practice of exploring imagery on screen. Other than this influence, I took a lot from fashion catwalk videos I watched on YouTube and would be inspired by the minimal - yet beautiful - settings. I just think that singular actions/imagery can have so many connotations and meaning to them that it's best to not overcomplicate things and keep it very simple. It allows people to read into things and come up with their own stories and concepts.

I got into Fuelled Dance Theatre not long after making FAG so I've been dancing/working with them to make a piece called Re-Fuelled (2016) which was our first Arts Council England funded show. I also went abroad to dance for a music video with Holly Blakey. After that I collaborated with Haus of Yosef to make a version of 'Dirty Rebirth' with him, which is about art therapy. Other than that, I've been making pretty stones and badges for market stalls with my girlfriend and applying to turn FAG into a live piece of dance work.

To have their first go at a commissioned piece of work. It allows you to trust your ideas and yourself as an artist and just go for it! You learn how stuff works in the industry and you can test if you are really up for the life-of-an-artist challenge.

How did you organise the filming? Was it hard/difficult for others to share your vision?

Alex Newton (Director of Photography) and the FAG crew (dancers, Catherine Bray and I) had a day to walk through stuff and see how it would work. Something I noticed was how, when previously working the camera myself, I am used to dancing with the camera. I think, because of this, Alex found some of my filming suggestions quite funny although I do not want to put words into his mouth! I'd often try and work out how to get the right shot by how exactly to move the camera, instead of moving the things around it. Despite this, I think everyone got my vision. I feel that I was confident enough in myself that everyone believed what I believed anyway.

I rehearsed a lot. I sent a hell of a lot of emails. I worked with my dancers (Mac, Carise and Joey) a lot. We spent most of our time finding 'the right walk' for all of them to share and decreasing the amount of space they could cover for three minutes of walking. We had make-up evenings to test the make-up out with Aiyaaz Khan. We spent time shopping together for costume and make-up.

How did you approach technology in making the film?

Honestly, not terribly well. Catherine Bray, my mentor for FAG, suggested camera man Alex Newton and he requested information on what technology I could get on loan from De Montfort University. He told me what we could use and I got it. In retrospect, I really need to go on a camera/technology short course to really understand what the current technology is within filmmaking. I don't really like to leave it up to the camera human. I'd much prefer to know all the ins and outs of every aspect of the project. Also, I find technology fascinating so I'd completely nerd out at all the fancy stuff.

Clearly, this clip is a social statement - what aspects of our current culture or society do you want to see changed?

I would like spaces and words to be reclaimed for the LGBTQ+ community. I want Western society to give up on binary ideas of gender. For LGBTQ+ individuals to have confidence in their beauty. Political correctness to rethink itself.

How was the experience for you as an essential first-timer?

Really lovely. I felt that I was trusted with my ideas and let free to do what I wanted. The Rural Media team were so supportive during the making of the film, and they still are now.

What advice do you have to give to people thinking about applying for Random Acts to help them as filmmakers?

Think of something you are passionate about and go for it. Your thoughts and creativity are valid. Your research makes it more. Trust and believe in yourself as an artist and live it. Live your artistic life everyday.

If they weren't already drag artists, how did you manage to persuade your three featured artists to dress up in drag?

There was no persuasion and they are not in drag. As individuals, they all play with gender in their everyday gender expression - which is why they are used for the project. They are not in drag as they are not an exaggeration of a woman, or a man, or anything binary. They are blank androgynous canvases with decorations of gender/gender-binary ideas. I decorate them to question what they are; what gender expression, what gender identity, what biological sex, etc. 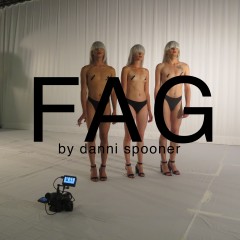 From Random Acts Midlands, Danni Spooner's evocative short film, FAG, is a telling development of ideas around gender. She gave us her perspective on the Random Acts program, and what went into making the film. Read our review here