Voice MagInterviewsTakeover Day at the…

During the evening of The Wallace Collection's takeover, organiser Hannah Stokes sang and performed to crowds of over fifty at a time. I caught up with her to discuss her skillsets, and ask how her confidence has improved since joining Wallace Youth.

17 year old Hannah Stokes joined a classical choir when she was around 10 years old. She never had professional singing lessons, and hadn't performed to large crowds before. I caught up with Hannah in between her song sets, for a chat about what she loves most about Wallace Youth, and to discover more about who she is artistically and how she has developed her talents...

When did you join Wallace Youth?

I joined Wallace Youth in September 2015. I've only been here for a short time, but it's still good. This is the first big event that we've organised apart from youth guided tours we did in late October earlier this year.

How long have you been singing?

I was really young, I think about ten. I was in a choir for a while but that was all the kind of training I ever had. I'd performed live before, but not to a massive audience; this is my first time. Actually being able to organise it myself and play it all…it's good! But yeah, pretty much all my life.

How did the idea of performing live evolve into tonight's takeover?

We knew that everyone taking part wanted live music. I've kind of always wanted the opportunity to sing live. I'd done it before, but not much- and so I volunteered, realising it would be easier than trying to organise something else (such as getting bands from school sixth form to play). Lola is one of my best friends, a guitarist, and we had sung together before, so I asked her whether she could accompany me and she said sure.

How do you think the evening's going so far?

I think it's good, and having a gallery to ourselves means everyone's having a good time. There is a stigma for young people and galleries, that they can't enjoy art, and I think this event breaks that. Having a good time and being with friends is a good idea. How did the publicity running up to the event go?

We tried our best. Last week we only had 60 people signed up. This week, we got about 200! A lot of my friends, and people from my school classes, have turned up. Much more people attended than we thought would.

I don't really have one. I think every medium can be appreciated as an art form; I particularly like Francis Bacon. His technique - and if you hear him speak - you can see he's such an intelligent man, and it's part of that which makes him a real artist.

What are some of the important skills and toolsets you are going to take from being part of Wallace Youth?

I want to study Art History at university, so being at Wallace Youth has been quite good for that. I don't know if I want to work in a gallery in the future, but I definitely want to write about art. So writing my own talk about it during this evening's event I think has helped me develop my skills. I am coming to my own conclusions about the eloquence of art and sharing that with others, and having the confidence to do so. 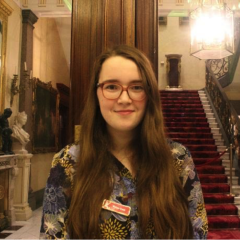 During the evening of The Wallace Collection's takeover, organiser Hannah Stokes sang and performed to crowds of over fifty at a time. I caught up with her to discuss her skillsets, and ask how her confidence has improved since joining Wallace Youth.