After completing a photography degree at Camberwell College of Art, Jonathan Maguire combined a love of exploring and film making, setting out on multiple explorations over the last few years.

Were you a filmmaker or an explorer first?

They both happened at exactly the same time. I suppose I could say that I had an equal interest in both before I started, otherwise I wouldn't have taken the opportunities offered to me. I was a photographer originally, studying at Camberwell College as a mature student. Before that I was in an incredibly horrible and boring office job for eight years – so I obviously jumped at the chance to become an explorer.

Did you always know it could be part of your job, or did the work happen gradually?

I always felt slightly limited by photography. I wanted to develop my ideas further and the stills medium didn't afford me the freedom I wanted. In the early days I had no idea what I wanted to do as a career – I was just happy to be creating things. I've always liked traveling too, so it makes sense that I ended up traveling as part of my job.

What was your first 'foot in the door' moment?

I was at a birthday party on a boat in Battersea when I started talking to a lady who worked for Saatchi & Saatchi advertising agency. She was producing a documentary about an expedition with a group of disadvantaged young people, as part of a British Schools Exploring Society (as it was then known) youth outreach programme. She was looking for a photographer who might also be able to shoot some B-Roll footage (cutaways, behind the scenes, General Views etc). She put her faith in me, although I had absolutely no experience at all. From there I built up a network of contacts in the expedition world, eventually starting my own business with the help of a fellow explorer and entrepreneur who has become my mentor and a very good friend.

How do you balance this with other commercial and creative work?

The balance is incredibly difficult, especially in these early days. The expeditions themselves are usually charitable ventures and most definitely not-for-profit so its hard to make any money from them. I have to rely on sponsors paying me to create branded content (usually mini documentaries with their company logo involved somewhere – the money comes from their Corporate Social Responsibility funds). As I'm away for long periods of time, unpaid, it can be incredibly difficult to save any money. It involves lots of forward planning. It also means that I'm away from my UK based clients for long periods of time and they usually have to use a competitor while I'm away and I ultimately lose the account! On the plus side, it gives me an amazing body of work to find new clients and the change in my attitude towards hard work (learned from living and working in extreme environments all over the world) gives me an advantage over my competitors. If I can film for two months on Everest, I can definitely get up at 5am for a 14-hour shoot in the city without any complaints.

Which project that you have worked on are you proudest of?

I think my proudest work has been the three years I worked with the British Exploring Society with the young people. It was far more than a film job. I was involved in the development of a group of disadvantaged young people for a few months each year – I still count some of them as good friends to this day and took a couple of young people on as apprentices in the last year. I'm also proud of the business that I've started, having no experience at all in the industry and no money – just the support of some amazing people around me as well as the ability to work without sleep.

What is the most exciting thing about your job?

All of it is exciting. I'm surrounded by some of the most imaginative and driven people I've ever met, who conjure up the weirdest and most wonderful ways to raise money for charity whilst seeing parts of the world that most other people only dream of. I never know what each year will bring. This year could see me driving down the west coast of north America following my friend, a double amputee war veteran, flying a specially built paramotor as part of the Icarus Challenge. I will also be filming a round-the-world attempt in a helicopter (it must take fewer than 10 days to break the world record), playing a game of football on the international date line on the frozen Bering Strait and rowing the Atlantic in a boat made of Lego.

What is the biggest challenge working on projects away from home?

The biggest challenge is trying to operate electronic equipment without constant or reliable electricity. I have to take solar power or manage my power consumption based on the next availability of a power socket. In the desert there aren't many plugs. I also have to carry everything I need – which consists of my cameras, lenses, lots of batteries, laptop, hard drives, lights, tripods, stands – everything you'd use in a studio; except I have to carry it in a rucksack on my back. It usually means that I can't take many clothes or luxuries.

What advice would you give to any young people wanting to combine an interest in exploring and filmmaking?

My advice is to just get out there and do it. It doesn't matter how good you are, only how keen you are to learn. I think this applies to every creative job – as I hire people now, I'm looking for the right attitude, not the best portfolio. I can teach you how to take a photo, I can't teach you how to change your attitude. If you wanted to be involved in exploration there are plenty of societies out there who are all desperate for photographers and filmmakers. Usually, you wont be paid and you'll have to provide your own equipment, but the lessons you'll learn from the experiences are unquantifiable. Expeditions are the most intense way to spend time with people and you'll create an unbreakable working relationship with everyone you meet; but only if you're nice to everyone you meet and you work hard.

The best advice I can give someone is to just get out there, meet people and make the most of every opportunity that comes your way. Be nice to everyone and never underestimate the value of a seemingly measly job – it's a small world and a good reputation travels fast.
http://www.jonathanmaguire.co.uk 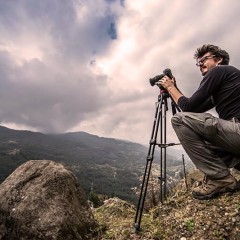 After completing a photography degree at Camberwell College of Art, Jonathan Maguire combined a love of exploring and film making, setting out on multiple explorations over the last few years.