What is your earliest memory of politics?

I remember that when I was about 10, the 2010 General Election was on TV and I saw a debate between David Cameron, Nick Clegg and Gordan Brown. My dad was getting irritated at what they were saying but I just remember thinking that they had very posh voices, they were quite old and they were acting more immature than me, which I found funny.

When did you first decide you'd like to get involved with politics?

I have always been engaged and interested in politics however it was when I joined the youth council that I really began to get involved. I felt that too many decision makers were disillusioned with the young people of today and I wanted to help change this. I wanted to represent Young People and campaign for a better future.

Which political platforms do you work with?

I work with MP's, the Adult Cabinet and our Elected Mayor.

Which key areas are you involved with?

I am mainly involved in Health and Wellbeing (mainly mental and sexual health), as well as youth democracy, events for young people and preparing young people for next steps in life.

Why do you think some politicians overlook young people's voices?

Young people cannot vote for their politicians so why should they listen? We live in a society which is run only by adults so therefore young people do not have any legislative power, we are easier to overlook than people with actual influence.

How do you balance a political life with a teenage life?

Sometimes this can be quite hard but I make it work. I tend to socialise and meet up with my friends on a Friday and the weekends which are always free of meetings and I do schoolwork and Youth Voice Work on weekdays. I enjoy everything I do (except homework) so I, like young people who do a sport, make sure a don't fall behind on things.

What are the highlights of your political life?

I love meeting new people and there is such a variety of young people in the Youth Parliament and Youth Voice in general. I have had the chance to make some lifelong friends from across the country who are all amazing and inspirational. I also loved speaking in the House of Commons on live TV which I see as a once in a lifetime opportunity. Finally, it is amazing to be able to make change for the better for people and to represent their views to all sorts of people.

What is the biggest challenge in your political work?

It would probably be to get other people motivated to finish work that needs doing. Everyone in the groups I am involved with are volunteers who give up their own time and are often very busy with school or work. For this reason it is very hard to get things done quickly and outside of meetings with the whole group.

What advice would you give to other young people hoping to get involved with politics?

All I would say is go for it. There are so many different routes into youth democracy be it through a youth council, a charity, the British Youth Council or even through setting up your own group. If you're interested in a certain issue, there will be others who are too, so connect with them, set up meetings with decision makers or whoever is relevant and don't let anything stop you. 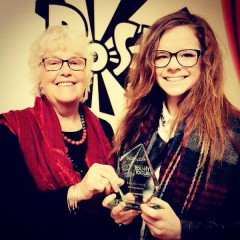