Voice MagFeaturesSchool: should it al…

Sadly, it is the case that within the current educational climate, arts subjects are being put on the back seat within the school curriculum.

Just like the cuts that are widely impacting the arts, creative sector and museums under the current government, the creative subjects taught within schools are receiving the same treatment.

The current education system is sacrificing the arts in order to make way for academic achievement within our schools and colleges. This is having a deeper impact on this generation's future: cuts to arts funding could put people off studying arts subjects at higher education, as it becomes harder and harder to get into arts jobs as a graduate, as the number of jobs become more reduced and specialised. Current Education Secretary Nicky Morgan, herself pronounced that teenagers should steer clear of arts and humanities if they wanted to get the best and widest range of jobs.

In some cases it's not even the curriculum itself that is steering young people away from studying the arts, but the schools and colleges themselves. Schools and colleges can steer pupils towards taking more academic subjects like science and maths at A level and GCSE, and away from pursuing the arts. Often this can be because the school itself receives academic success within league tables or because the school has a particular focus away from the arts, establishing itself as a technological college or similar.

But, it's not just the schools and colleges putting pressure on its pupils to pursue academic subjects over arts subjects, it can be the parents of those pupils who desire their sons and daughters to focus on the academic subjects that are deemed to be of more importance.

The arts can too often be labelled the 'fun' or 'easy' subjects. And of course now the arts appear to be risky future career choices, renowned for low pay and highly competitive jobs, whereas science and maths are known as sturdy, well-paid and substantial career choices. Nicky Morgan states 'the subjects that keep young people's options open and unlock doors to all sorts of careers are the STEM subjects: science, technology, engineering and maths.' This view is often filtered down from government to the parents of teenagers.

The importance of studying creative subjects needs reasserting. While the arts have seen some series cuts, there are still a wealth of jobs available. Taking a job in the arts doesn't just mean trying to make it as an artist or actor - jobs that are notoriously highly competitive - there are a huge array of jobs that surround the arts at every kind of level, from technical production, to arts management and museum curation. The arts sector is often seen as offering only a handful of 'dream' jobs, when in fact it is a rounded and very varied industry.

Studying arts subjects throughout school and college, not only enriched my own education, but what I learnt stayed with me throughout my life and influenced my future choices. Its really important that arts subjects remain relevant and engaging within the national curriculum, they need to inspire future generations to get into the arts, and indeed to be imaginative in a range of non-arts jobs. Perhaps we should be looking towards companies such as Google and Apple - flourishing, forward-thinking companies who strongly encourage creative thought in their employees. Creative thought is also encouraged in many tech start ups, with investors looking for people who aren't following the same old formula. Academic education teaches us the rules, creative education teaches us how to break them.

Beyond career choices, an arts education at school and college is really important as it gives young people the chance to study what they love and really flourish, developing skills and building upon existing talents. It makes school an enjoyable place for many children, and it teaches them to use their intuitive side. Obviously I am not denying how important it is also to receive an academic education: in my case, studying science and maths at school was the only time in my life I ever encountered such subjects and it would have been a loss to not have studied them. The reason I have not gone on to study those subjects further is not because I wasn't exposed to them, I was given the chance to try them and then decide they weren't for me - something which isn't happening with many arts subjects. If anything, having gone to a science college school I was overly exposed to science. I didn't take it onto further study because I didn't enjoy it and I wasn't passionate about it, but I'm glad I saw what it was all about. I think its important to choose to study at further education what you are passionate about, whether that be science or the arts.

Similarly, studying the arts at school could be the only arts that young people access within their lifetime, the only time that they study art or drama, which makes it of vital importance. If it is underplayed it in the curriculum then it is not getting that exposure, it is not letting pupils know that it is a career option or that it is an important subject in its own right. This can influence their relationship with the arts sector in the future and the way they engage with creative society, galleries and museums but more than that, without it you are denying an all-round education to a younger generation. 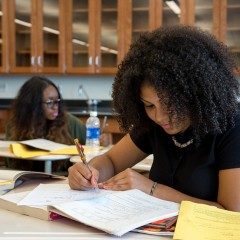 School: should it always be about academic achievement?

Sadly, it is the case that within the current educational climate, arts subjects are being put on the back seat within the school curriculum.