Asher Gibson was a runner-up for the 2019 Orwell Youth Prize for his essay on social and ethnic exclusion.

Straddling the border between zones 1 and 2 and diverging from the bustle of Whitechapel High Street is a road with a “Jekyll and Hyde” history of struggle against a shadow of social deprivation. Brick Lane, introduced to many by the talking heads of young, affluent YouTubers reporting “THE BEST PLACE TO GO THRIFT SHOPPING IN LONDON”. The street resembled the bright, bohemian North Laine Bazaar of Brighton, which stood firm as the place-to-be for young alternatives, from the “goths” of the 1980’s to the “softbois” and “eGirls” of today. Brick Lane was like London’s sixth form sketch book; illustrated by the residents with street art and stickers, models, murals, and tiles painted to tell the stories of the people who lived there. Its artwork was a sign of possession. The people who painted Brick Lane loved this street and showed this with posters, paints, and prints.

In contrast, the street’s visual noise was coated by a blanket of quiet. This may have been the fault of the late Wednesday morning, but the upper end, Osborn street, was nonetheless tainted by an air of deprivation. Shops were closed and their grates were painted over, but not with street art. Instead, with the haphazard graffiti signatures that declared a place “abandoned”. The few people I passed on Osborne Street were far removed from the young, middle-class bohemians I met near the lower end – the group who introduced me to the street in the first place. They were would once be called the “salt of the Earth” by people who want to show them a distant sympathy, but on the basis of their usefulness, not their humanity.

Many were not rich, and many more were migrants from one to three or more generations. These have been Brick Lane’s people for decades. The street began its life as Whitechapel Lane, as a slum area that, during the Victorian era, was one of the worst hit streets by the Jack-the-Ripper murders. Over the years, it began to rise in its economic status, becoming a haven for many migrants escaping poverty, war, and deprivation in their home countries. During the 19th and 20th century, they were mostly Jewish and Irish, but today are mostly of Bengali heritage. However, the affectionate defacement of an ATM sign with “HALA MADRID” paired with a love heart in black spray paint shows that this is not the limit to the diversity of people that have come to make Brick Lane their home.

The people of Brick Lane were not just the bright, white talking heads on YouTube. Instead, they were more like the pixels in the DSLR in my hand. They were bright, varied, multicoloured components of an image that reflected the reality of both London and Britain. Its artwork, defacement, stickers and storefronts showed Brick Lane as a unit pushing back against the battles of it’s past. It is a case study of Britain’s story as a whole. Its language is a blend of Latin, French, and German with loan words from Arabic. Its cultural symbols, from the cup of tea to the tikka masala, were taken from once distant colonies in South Asia. Its universities and research are funded by the European mainland, while its buildings are built on the sweat of Slavic expats. The very essence of Britain’s cultural character has been built on the contributions and the exploitation of others. If one lesson can be learned from Brick Lane, it’s that Britain’s current trend of isolating itself from the rest of the world will be suffocating. It will lose the very things, the very people, that brought Brick Lane up from the ground and made it the wonderful, dog-eared sketchbook street it is today.

We interviewed Asher about their entry, and you can read the interview here. 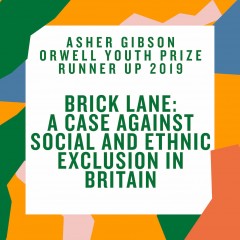 'Brick Lane: A Case Against Social and Ethnic Exclusion in the UK' - Asher Gibson

Asher Gibson was a runner-up for the 2019 Orwell Youth Prize for his essay on social and ethnic exclusion.