For mental health awareness week, we spoke with Heffy Wheeler, who struggled with prenatal and postnatal depression and was hospitalised while pregnant.

The word depression often conjures an image in our minds of someone who is so crippled by sadness and despair that they cannot do anything but lie in bed in the dark. But this image is so often wrong. Depression looks different for everyone who suffers from it, and the despair is not always evident on the surface.

This was the case for Heffy Wheeler, who went to work most days with a smile on her face, but on the inside was intensely suffering from prenatal, and later postnatal, depression.

“Sometimes, depression looks like someone who goes to work with a smile on her face and goes home and wonders if she should end her life,” she said.

Heffy’s battle with her mental health started when she was pregnant with her first child. At first, she experienced general anxiety, but this soon manifested into a complete disconnection with her pregnancy.

She was still able to function in certain areas of her life – work being one of them. She went to work with a smile on her face, pretending everything was alright and began using her work as an unhealthy coping mechanism. She worked without taking breaks or eating lunch, which only intensified her anxious, intrusive thoughts when she went home from work and no longer had a distraction to keep her mind busy.

“This was not something that was easy to maintain,” Heffy said. “It was almost like living a double life.”

As her anxiety and confusion escalated, she began hallucinating at home, and didn’t believe anything she was being told in regards to her pregnancy. When she saw her baby at her 20 week scan, she expected to feel a wave of relief, but instead she felt nothing; her anxieties had completely disconnected her from her pregnancy and her baby.

“My anxiety and intrusive thoughts were so overpowering,” Heffy said. “These things were facts in my head, and it’s so powerful when your brain is so certain that you’re right, even though looking back, I can see how poorly I was.”

When she was 30 weeks pregnant, she was admitted to a psychiatric hospital in the mother and baby unit. This was a turning point for Heffy. She received the treatment and care she needed and not only did her intrusive thoughts start to diminish, but she also started to recover mentally and reconnect with her baby before she gave birth.

“All of the triggers of the outside world were taken away from me, which allowed me to exist without suffocating in my mind,” Heffy said. “They took such great care of me; I didn’t want to leave.”

She told no-one except her mum and her husband that she had been admitted to the hospital. She was ashamed, and hid it from everyone else. But about a month after her son was born, Heffy took to social media to share her story. She didn’t want to be ashamed anymore, so she started posting in real-time about her struggles and the reality behind her pregnancy in the hopes of reducing the stigma around mental health.

Social media has become a highlight reel of our lives, but Heffy wanted to lay herself bare and be completely real with everything she had gone through.

“You don’t have to have the dream pregnancy; it's not for everyone,” she said. “We need to normalise not being okay, speaking about it and not expecting women to glow and love pregnancy.”

Shortly after, she began receiving messages from both friends and strangers, all inspired by her courage to share the raw details of her story. This also allowed people to identify in themselves and others the symptoms of prenatal and postnatal depression because the symptoms are not always what you expect, Heffy said.

But by the time Heffy became pregnant again, 18 months after the birth of her first child, she had slipped into a deep, dark depression. The anxieties that plagued her mind during her first pregnancy were replaced by a mental pain so unbearable that she became unable to function in many aspects of her life. It was as if someone had switched a light off inside her with no warning.

“Depression isn’t a big enough word for [what I felt],” she said. “It was agony every waking moment, and there was no relief from the mental pain.”

As her second pregnancy progressed, so did the agony. Heffy spent most of her days in bed, under constant watch from her husband and her family, as their main goal became trying to keep her and her unborn child alive. She was so consumed by an existence that had become unbearable that she wanted to take her own life. She felt no joy, no connections with her family and could hardly function.

“Wanting to kill myself or to not exist and then having to have a baby was just one of the worst experiences of my life,” Heffy said.

When the time came for her to have her child via C-section, she felt no connection with her newborn daughter.

“It was difficult because I had bonding issues with my daughter,” she said. “And it’s just awful when you don’t feel anything or have that natural, motherly instinct simply because you’ve got depression.”

Heffy began to recover from the agonising thoughts and feelings that had consumed her during her pregnancy, and with this recovery came an overwhelming amount of love and connection with her entire family. She survived the worst and continues to “hit new peaks of happiness” every time she’s with her children. Her depression did not make her a bad person or a bad mother; she was mentally ill, and this illness turned her into someone she wasn’t, she said.

Again, Heffy took to social media to share her story. One in four women suffer with mental health issues while pregnant, but Heffy had never seen or known anyone who had gone through this. If no-one shares their story because of the stigma surrounding it, how will other women know they are not alone?

“So many people feel this way but where are they? Where the hell are these women? They’re sitting at home terrified, beating themselves up, blaming themselves: terrified to speak out about their suffering. And this is why the number one cause of death for women in the first year after year having a baby is suicide – because people experience this, and it's such a stigmatized things that they just don't see a way out,” Heffy said.

While she received her fair share of criticism for sharing her story, she continued to be open and honest to try and help other women who may have experienced the same thing. She wanted to show women that they don’t have to have a perfect pregnancy or an instant connection with their child and that there is light at the end of the tunnel even in the depths of despair. Women who are experiencing this shouldn’t be afraid of their feelings or what people will think of them; they should talk to their midwife and get access to the support that is available for pregnant women who are struggling with their mental health, Heffy said.

Heffy has built a community on social media where women who are struggling can find a safe space and know they are not alone. Heffy and more details of her story can be found on instagram at @heffyx.

If you or someone you know is struggling with any form of mental illness, you can find help and resources here. You are not alone. 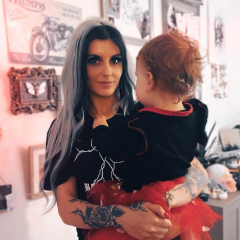 How Heffy Wheeler turned her perinatal depression into a community for helping women.

For mental health awareness week, we spoke with Heffy Wheeler, who struggled with prenatal and postnatal depression and was hospitalised while pregnant.