Ambiguity and loneliness are celebrated in the story of the tomten, at odds with some of our more traditional Christmas folklore.

I grew up with Astrid Lindgren’s children’s books The Tomten and The Tomten and the Fox, both beautifully illustrated by Harald Wiberg, and they heavily influenced not only my idea of Christmas and winter, but also my outlook on life and art. The ‘tomten’ is an anglicised spelling of a figure from Scandinavian folklore sometimes known as the tomte (in Norway and Sweden), also referred to as a nisse in Denmark, tomtenisse in Sweden, or tonttu in Finland.

The tomte or nisse is a small supernatural creature who is often described as looking like a little old man and was believed to protect farms and homesteads. The term ‘nisse’ is thought to derive from the Old Norse ‘niðsi’, which means “dear little relative”. In Astrid Lindgren’s books the tomten appears as a very small elderly man, who kindly and quietly protects the farm and all life on it through a cold winter night.

Due to the tomten’s Father Christmas-like appearance in Harald Wiberg’s illustrations for the books, with his long red hat and long white beard, as a child I always assumed he was the very real creature that the idea of Father Christmas had been based on. The tomte or nisse has in fact been thought to be one of the Christmas bearers-of-gifts in many Scandinavian countries since around the 1800s, although the folklore pre-dates that.

But the reason that the tomten stayed with me so much was his differences, rather than his similarities, to the ideas of Christmas that I already had. Within the story the tomten doesn’t leave gifts or reward or punish good or bad behaviour like Father Christmas supposedly does. Even in his protection of the farm, he does not have to face any great adversity or accomplish any significant tasks, all he does is quietly keep watch and check that everyone is safe and warm and well-fed.

He visits the animals and talks to them in tomten language, a language that animals understand, and comforts them that the winter will end, and they will be warm and happy again, bringing more straw to the dog in his kennel so that he can be warm, and bringing more corn for the chickens to eat in return for an egg for his supper. He visits the humans in their house also, although they are all fast asleep and do not realise he is there, but he checks that they are warm and safe too.

In The Tomten and the Fox when a hungry fox comes sneaking around the farm looking to eat the hens, the tomten stops him but he is not forceful or cruel about it. Instead, the tomten tells the fox that he can share his bowl of porridge that the children have left out for him, every night if he’d like as long as he leaves those hens alone! It was this quiet yet stern kindness that made the tomten seem special to me, but more than that it was the ambiguity and loneliness in the stories themselves, quite at odds with the Christmas folklore I was familiar with.

There is very little concept of good or bad behaviour or any consequences from such things - even the fox who was about to kill the chickens is simply given a little warm food. I was also used to the standard British presentation of Father Christmas as a large, jolly man, where instead the tomten is small and weathered-looking. It’s his small size that emphasizes the loneliness of being the tomten too. While British depictions of Father Christmas show him in fine, warm clothes, surrounded by presents or in a cosy living room, the tomten wanders in his grey little woollen clothes, between buildings, across large sheets of snow and under an expanse of stars, a tiny figure in the darkness.

Several of Harald Wiberg’s illustrations show beautiful and vast-seeming landscapes, tall trees and miles of forest, surrounding fields and fields of farmland, all under a blanket of snow that shines under the starlight. These were some of the first pieces of art that affected me, first of all because they were incredibly beautiful, but also because they felt so strangely lonely. The tomten is described as being unknowably old, and the landscapes depicted felt that way to me too, which in turn evoked some loneliness in me. I realised that outside of the city there were places all around that were older than I could imagine, places that had seen winter after winter and seen people come and go, just as the tomten had. It made me feel so small and insignificant in comparison, and that in the way these landscapes were lonely for having seen so much, I was lonely for having seen so little.

But it was a lovely sort of loneliness. The beauty of the tomten stories is that in seeing the tomten find peace in his lonely little existence, you can too. And from there you can realise you are not so insignificant at all. Everybody is pottering about in their own little tomten way, making it through each winter and lending a hand to those around them. These stories seem to acknowledge that it is really the small and almost unnoticeable acts that keep everyone and everything ticking along.

I recently found out that Astrid Lindgren’s original tomten book is based on the traditional Swedish poem Tomten by Viktor Rydberg, which is even more existential again. In this the tomten directly questions where we have all come from, and where time itself has come from, all while caring for the farm and its inhabitants as he does in Lindgren’s adaptation. It seems to highlight the futility of attempting to understand life, even this seemingly immortal and supernatural being questioning where we have all come from and where we will all go to.

It may seem strange that something so ambiguous and existential would be a Christmas tradition, but this is what midwinter has traditionally been for, an end of a year approaching, plants lying dead under frost, animals hibernating, and even humans winding down and considering the world around them, a world that is in the process of dying and being reborn. Pre-Christian traditions celebrated midwinter as representative of the moment of death in the endless cycle of death and rebirth and in small ways – like the tomten stories – this tradition lives on.

A reading of Astrid Lindgren’s The Tomten along with Harald Wiberg’s illustrations can be found here. 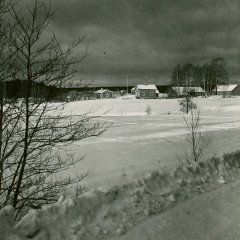 The Tomten: a lonely and existential alternative to Father Christmas

Ambiguity and loneliness are celebrated in the story of the tomten, at odds with some of our more traditional Christmas folklore.