Delving into the 'true crime' of Christmas time, join us as we relate to you the story of Texas' most infamous festive felony, the Santa Claus bank robbery.

Christmas, 1927. 23 December to be exact. It's a festive day in the town of Cisco, Texas. Shops are filled with gift-givers, wreaths hang off doors, and kids squeal with excitement when they spot Santa Claus wandering into a bank. All seems well, but the events that followed led to three dead, eight wounded, and the biggest manhunt in Texas history.

The man with the bag was a career criminal named Marshall Ratliff. Recently pardoned by the notoriously benevolent Governor Miriam Ferguson after one year in jail for robbing a bank in Valera, Texas, with his brother Lee, Ratliff had no intention of keeping his nose clean. Living in a boardhouse with his brother, Ratliff took to chatting with the landlady. She mentioned she'd sewn a Santa Claus suit for her husband, and this sparked an idea in Ratliff's mind. There was a bank in a town he'd done time in, Cisco, one he knew would be fit to bursting with cash and bonds this close to Christmas, and to rob it he'd need a disguise.

This was a four person gig. His brother Lee was his first choice, but the crook was tossed back in jail on burglary charges soon after the plan was first concocted. Two criminal acquaintances of his filled the gaps: Henry Helms and Robert Hills. Neither had a problem with violent crime, and Ratliff wasn't expecting a pleasant winter stroll. Next up they needed a safebreaker. The one they initially recruited took ill before the heist, which led to them pulling in a relative of Helms, a family-man desperate for money named Louis Davis. Davis was reluctant, but after being assured that no guns would be fired during the robbery, he acquiesced.

The four of them cruised through the streets of Cisco. Ratliff donned the Santa Claus outfit borrowed from his landlady — complete with hat and beard — and stepped out of the car several blocks from the bank. As he wandered down the street, children approached him as fans of Father Christmas. Stopping to wish some of them a merry Christmas, he even assured one boy that he'd personally deliver him the football he wanted once the day arrived, before patting him on the head and moving on. Walking into the bank, customers and cashiers smiled and laughed at the appearance of the holiday mascot, perhaps amused to find Santa going about his daily grind. The amusement faded fast however, when jolly old St Nick produced a pistol and declared "this is a hold up." The fact that the robber said "this is a hold up", and not "this is a ho-ho-hold up" is, quite frankly, a travesty. Soon after, his three helpers moved into the bank, brandishing weapons of their own.

Now what you might not know, is that back in those times Texas saw three or four bank robberies a day. To combat this the local government had set a recurring $5,000 reward for any enterprising city who shot a bank robber dead in the middle of their crime.

A woman and her child who had entered the bank in order to greet Santa, fled when they saw the situation. Alerting the authorities, police officers surrounded the building almost immediately. With the $5,000 in mind, a sizable number of locals took it upon themselves to grab the nearest gun and 'do their civic duty'.

Meanwhile, inside the bank, Santa and his crew had managed to empty most of the cashpoints and were stocking up on bonds from the vault when one of them alerted the others to the intense police presence outside. With a sack stuffed with dollar bills, Ratliff called for a hasty retreat, but as soon as the crew started making their way outside with their hostages, the town erupted into a shooting gallery. Approximately 100 locals had gathered to make Ratliff's red suit even redder. At least six hostages were shot, although in all the confusion, no one could tell who had done the shooting. The volley of bullets left their mark on the robbers too, with Davis the family-man severely wounded, and Ratliff himself copping a bullet to the leg and jaw. Despite this, the group were able to shoot their way to the car they'd arrived in, along with two young children they'd secured as hostages. Two police officers, Police Chief Bedford and Deputy Officer Carmichael, were fatally wounded during the encounter. The robbers drove off, pursued in earnest by the remaining police force.

It wasn't just law enforcement who gave chase, one man years later remarked that after the robbers had fled locals "were still going into the hardware store and grabbing guns out of the racks or out of the showcases [...] and grabbing onto the car. Carloads of them were headed South down main street"

Ratliff didn't prove to be as elusive as his mythical counterpart. Realising they'd forgotten to fill their car with gas before the heist, he and his crew ditched the vehicle and attempted to steal a car driven by fourteen-year-old Woody Harris. Woody and Harris fled their car, but when the robbers piled in with their hostages they realised the wily teenager had taken the keys. Finally finding a new and usable vehicle, they started to drive off, now under a hail of gunfire from pursuing locals, which saw Hill shot in the arm. In the chaos they'd left all the money behind. The two children were thankfully abandoned during the hectic car exchange.

Driving to a safe distance, Ratliff and his gang began to flee on foot. Davis, in a grievous state from his wounds, died not long after. In the pursuit, two more officers injured themselves through the accidental discharge of their weapons. The three remaining members managed to evade detection for four days despite aerial support and their injuries. Cornered by the authorities, they responded with another exchange of bullets, injuring Ratliff further and leading to his capture. Hills and Helms were able to slip from their pursuers grasp, but were both caught three days later, on 30 December. Captain Tom Hickman described the men as "literally riddled with bullets."

Miraculously, all three men recovered from their injuries. Helms was confirmed to have been the one to kill Carmichael and Bedford, which led to his execution. Hill took to his own defence during his trial, crying and begging for mercy after pleading guilty to armed robbery. He was sentenced to life in prison, from which he escaped three times, before being released in the mid-1940s. He lived a reformed life for the rest of his days.

Ratliff, long since stripped of his Santa Claus costume, had a far more contentious fate. After being convicted of armed robbery and abduction, sentenced to life in prison (which was reworked into a death sentence during a later trial), and laughed out of his insanity plea, Ratliff was sent to Eastland County Jail. The public were furious at the delay in his execution. After an appeal failed, Ratliff began to realise the severity of his situation. Feigning paralysis, two of his jailors removed him from his cell in an attempt to revive him. Ambushing them, he grabbed a pistol and shot one of them dead, then wrestled with the other until he was finally beaten into unconsciousness. By then, an angry mob had formed outside. Seeing this new development, they burst through the doors, dragged Ratliff out, and lynched him on the spot.

A grim end to this criminal Claus.

Header Image Credit: "santa steals ornaments" by chascow is licensed under CC BY 2.0 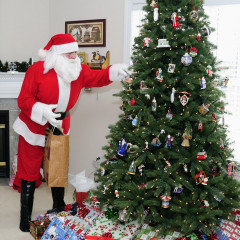 When Santa came to town: The madcap story of the Santa Claus bank heist

Delving into the 'true crime' of Christmas time, join us as we relate to you the story of Texas' most infamous festive felony, the Santa Claus bank robbery.