Human sacrifice, fertility rituals, and more feature in the histories of some of our well-known Christmas plants.

Our Christmas traditions often originate from much earlier festivities and beliefs, but none more so than our festive plants. Often symbols of life, death, fertility, or peace to pre-Christian religions, these plants’ uses today still reflect their rich cultural history.

Mistletoe is commonly known in modern times as a plant to kiss under at Christmas parties, but this tradition may come from its long pre-Christian history as a symbol of fertility. Mistletoe represented fertility in Roman and Celtic cultures, and also represented peace, love, and understanding to the Romans and was hung above doorways during the winter festival of Saturnalia to protect the home. Norse and Celtic cultures both had a great reverence for mistletoe also. Norse tribes used the plant to mark neutral ground, where weapons were laid down and feuds put to rest beneath the mistletoe.

Celts held the oak tree as sacred and mistletoe, which is a parasite, would often grow on oak, leading Celts to believe it sacred by association. According to Pliny, the Celtic Druids used mistletoe in the ritual of oak and mistletoe, where a sacred oak would be climbed and the mistletoe growing on it cut down and used in a ritual where two white bulls were sacrificed, and the mistletoe made into an elixir for fertility and counteracting the effects of poison. During the ritual the mistletoe was cut so as to fall into a white cloak or cloth, never to touch the ground as its spirituality was believed to be tied to the fact that it grew between two worlds – earth and the sky.

Pliny’s account of this is the only account – although experts say it does sound plausible that it could have been a real ritual. However, evidence gathered from bog bodies suggests that mistletoe’s use was more likely to be medicinal for the Celts rather than ritualistic. However, it has been said that it is possible that mistletoe was linked to human sacrifice – before the Romans banned the practice, which may have been what caused the new association with white bulls instead.

Mistletoe continued to be used in winter celebrations during Christian times, both as a decoration to kiss under and also to supposedly ward off witches and demons. The tradition of kissing under the mistletoe is thought to have been popularised by those working as servants in Victorian England.

Despite mistletoe’s continued popularity and association with Christmas, some members of the Church still view it as a pagan symbol, and it is discouraged from being hung in a number of churches. However, this is not an issue for everyone, and in Tenbury Wells’ annual Mistletoe Festival, modern day druid groups have been taking part in a multi-faith mistletoe blessing ceremony alongside Christians for the last few years.

If you fancy heading out to gather some mistletoe this festive season, remember to bear in mind that it can be very poisonous and is not suitable to hang where children or pets could get a hold of it. If you are worried about it being poisonous but still want some mistletoe around the house, try making your own out of beads, felt, or paper – if you get the colours right it can look pretty much like the real thing!

If you’d like to learn more about mistletoe and all the folklore associated with it, mistletoe enthusiast Jonathan Briggs has set up an entire website dedicated to it which can be found here.

Holly holds significance to Christian beliefs as its sharp leaves are thought to represent Christ’s crown of thorns and its red berries, his blood. However, holly once also had negative connotations in Christianity, as a 19th century Swiss legend claimed that the fronds of palm trees that had been used to welcome Jesus to Jerusalem turned to holly when the crowd shouted, “Crucify him!”

But holly has been sacred to religions long before Christianity, with older religions believing it’s barbed leaves could protect against evil spirits and some believing that its red berries represent menstrual blood.

It also has symbolism due to the pagan belief in a Holly King and Oak King who rule over half of the year each. The belief may come from the Welsh myth of the goddess Creiddylad, who represents the sun, and the warring knights of the sky and earth who fight for her affection. The sky god is represented by the oak and rules over the waxing year from midwinter to midsummer. At midsummer he surrenders his life to the god of Earth and the underworld who is represented by holly, who then rules the waning year, from midsummer to midwinter, before surrendering his life back to the sky god at the end of his reign each year.

The myth of Creiddylad is also represented as a less pagan seeming tale in the early medieval Welsh Arthurian legend, Culhwch ac Olwen. During medieval times also, some Christians saw John the Baptist as associated with oak and Jesus with holly, echoing the myth. The word ‘holly’ also of course bears similarity to the word ‘holy’, with them indeed coming from the same word root of the Anglo-Saxon ‘holegn’ and Old High German ‘hulis’, both meaning ‘holy’.

Holly is still used in wreaths to this day to echo Jesus’s crown of thorns or still as a Pagan decoration. If you are planning on gathering holly for wreath making, remember that, like mistletoe, holly is poisonous and can cause vomiting or even prove fatal.

Yews are ancient trees thought to live for thousands and thousands of years. Yews cannot be dated like some trees by cutting them open and counting the rings inside as many extremely old trees become hollow over time, with fungi eating the dead wood inside, destroying the rings and leaving a hollow trunk. This hollowing is not a weakening however, often making the tree more resilient to high winds and releasing minerals that had been stored in the centre of the tree over the years. Additionally, yew trees often grow an interior root, down through the decaying insides and into the soil below. That root can become a younger trunk over the years, and over centuries the older outer trunk will fall away and decay, leaving a seemingly young tree in its place. Due to this the yew has often been associated with reincarnation and immortality.

Several churchyards around Britain, especially in Wales, have yew trees growing in them. This is usually a sign that the site was a place of worship long before Christianity, as the yew has been important to many ancient religions. These sites also often have a circular and sometimes elevated geography, suggesting that they pre-date the Celts and may have originally been Bronze Age or even Stone Age burial mounds.

The yew is considered to be the Tree of Life or Tree of God by many cultures, representing death and the underworld as much as it represents heaven and immortality. The ancient Romans believed that yews grew in hell, while the ancient Greeks believed the tree to be a gateway to the underworld. The yew is also connected to the Celtic or pagan festival of Samhain, when the veil between the worlds of the living and the dead is thought to grow thin.

Despite its connotations with death, the yew still represents life to many people too, or rather death and life as interconnected and simultaneous concepts. This, its status as an evergreen, and its prominence in churchyards means that it has become associated with Christianity, its branches appearing in Christmas wreaths and decorations.

The origins of the Christmas tree come from the sacredness of evergreens during wintertime as symbols of persisting life in the cold and dark. Pre-Christian festivities often featured evergreens hung around the home – usually only the branches but in ancient Rome whole fir trees were placed in temples during Saturnalia.

The Christmas tree as we know it today may have come from a variety of sources. One such source is the Paradise Tree, from medieval German Miracle Plays. The Paradise Tree was made of several branches or a wooden frame and decorated with apples to represent the Garden of Eden. The plays featuring the tree were performed on advent or Christmas Eve and were meant to relate Bible stories to those who could not read.

The Paradise Tree eventually evolved to have more decorations on it, such as cherries, communion wafers, and pastries, often in the shape of stars, bells, or angels, and began to be referred to as the Christbaum (Christ Tree). In some parts of Germany and in some Slavic countries, the top of a fir tree was cut down and hung upside down from the ceiling in the home.

The first Christmas tree originated in either Tallinn, Estonia or Riga, Latvia, with both cities claiming to have done it first. Both countries were part of medieval Livonia at the time, with both trees reportedly being put up by the Brotherhood of Blackheads. The first account of bringing the tree into the house, however, comes from Martin Luther in around 1536, who brought a tree into his home and decorated it with candles to represent the stars and heaven.

Another legend linked to the Christmas tree is that of Saint Boniface of Crediton travelling to Germany to convert the pagan people there to Christianity. He allegedly came across a group of pagans about to sacrifice a young boy to Thor while worshipping an oak tree, representative of the god. In anger, Saint Boniface cut down the oak, where a fir suddenly grew in its place. His followers then decorated it with candles so he could preach to the pagans throughout the night. However, this story was not found in any early writings about Boniface and seems to have sprung up several centuries later.

Christmas trees became popular throughout the 1600s in Germany, often being decorated with edible treats and with a figure of the baby Jesus, an angel, or a star at the top of the tree. The first Christmas tree in the UK is thought to have been brought by the German Queen Charlotte, wife of King George III. In the 1790s there are records of her having a decorated yew branch in Windsor Castle and in 1800 a full yew tree at the Queen’s Lodge in Windsor.

Having a Christmas tree then became popular amongst upper-class families. In 1848 a drawing was published in the Illustrated London News of "The Queen's Christmas tree at Windsor Castle", showing Queen Victoria, Prince Albert, and their children around a Christmas tree.

The Christmas tree has caught on with everyone and is now an important fixture in many homes at Christmas time. Although it is associated with Christianity, some pagan families celebrate in much of the same way but for different reasons. Some believe that by bringing the tree into your home you are giving the wood spirits a warm place to stay during the cold winter, and food and gifts are hung on the branches as offerings to the spirits. 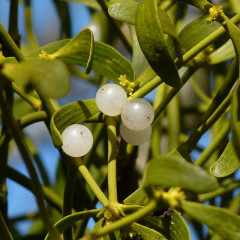 Human sacrifice, fertility rituals, and more feature in the histories of some of our well-known Christmas plants.