This week's Instaviews is with filmmaker and mental health activist, Ella Greenwood and it's one you won't want to miss.

This week's Instaviews is with Ella Greenwood, filmmaker and mental health activist. Join us on Thursday 26th November, on Instagram at 4:00 pm for our third instalment of Instaviews since its return.

At the age of only 19, Ella is the director of London based production company Broken Flames Productions and has had her work selected for BAFTA accredited festivals and featured by Deadline, Huffington Post, BBC, Yahoo, Film Stories Magazine and more. She also works as a mental health activist and is an ambassador for teen mental health charity stem4.

Her recent short film Faulty Roots which she made when she was only 18, was nominated for Best Script by Film The House which is run by Parliament and sponsored by Disney, Warner Bros, Lionsgate & more. The short has been praised for promoting awareness of teenage mental health, with UK Film Review saying that in the film “these massive issues are addressed in the most quiet and compassionate way possible… with normality and understanding”, with other critics pointing out the need to expand on the conversation that the film focuses on.

She is now working on a feature length version of 'Faulty Roots' and it was just announced by Deadline that Gavin & Stacey's (BBC) Melanie Walters and Sanditon's (ITV/PBS) Kayleigh-Paige Rees are the first to join the film.She is also working on a new short film 'Self-Charm' which her company Broken Flames is co-producing with Tallulah Films in the US (recent work includes Netflix's Little Miss Sumo and Film4's Queens).Ella has been called “an engaging, thoughtful and decisive young filmmaker to watch” by Sarah Cartland of Caution Spoilers and "a rising young acting talent" by David Duprey of That Moment In. 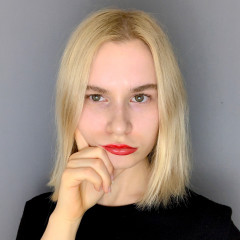 This week's Instaviews is with filmmaker and mental health activist, Ella Greenwood and it's one you won't want to miss.