James was nominated by his parent for his progress with his Silver Arts Award.

They said 'When Jamie told me he wanted to make a stop-motion animation using clay models and Dragonframe animation software, I knew he had never done anything like this before. It was an ambitious idea, as stop-motion animation is notoriously time-consuming and fiddly, requiring huge amounts of patience. Jamie’s first step towards achieving this was to do a two-day workshop run by a professional animator. The short animation is also peppered with nuanced references to other animated films that Jamie admires, eg, Wallace and Gromit, Kubo and the Two Strings, Batman and Loony Tunes. He designed a small newspaper as a prop, again putting references from other films into the newspaper so that the prop was almost a piece of art in itself. Making a clay figure walk and get up from lying down - none of these are easy without the sophisticated equipment professional animators would use. Jamie’s general enthusiasm for the art form is clear. He watched the different work of animators he admires and became more and more knowledgable. This was a real labour of love.'

View Jame's animation A Small Adventure to Make a Hero:

In what ways would you say your Arts Award has influenced your artistic achievement, creativity, leadership or progress?

It has influenced my progress by helping me realise the personal impact that my art can have, as the good feedback I got has given me a lot more confidence in showing others my art. Furthermore, it taught me that the patience needed for something as time consuming as animation is worth it as the end project always looks better the more care that I put into it.

How has participating in an Arts Award impacted your artistic skills or career development?

My Arts Award qualification helped me to prove to myself that I had the ability to make a highly detailed short film which also had a lot of personality, without sacrificing quality and that if I have passion for something, it really does show in the art that I produce.

Following my qualification, I am going to improve my skills in animation by increasing the quality of the armatures that I use and by working on a more detailed story and eventually adding in voice acting.

I am fairly undecided when it comes to future careers, however I am fascinated by art forms that have a unique charm and style, such as claymation and puppetry which are art forms that I don’t think have been used to their full potential.

Have you got any advice for other young people working towards an Arts Award?

My main bit of advice for someone who is going to do their arts award is to keep at it, put in effort. It is obvious how much effort you have put in by your end result. It isn’t really important what you have used to create your end project, but it does really matter how passionate you are and how much of that passion comes through in your art. 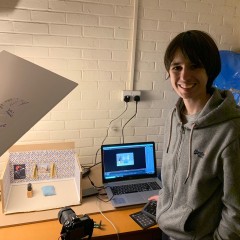