Bhavesh Jadva was completing his Bronze Arts Award,when he was invited to join the Arts Award Youth Network as a representative for the North West. He has since become a key team member, working as an Associate Editor at Voice for the last couple of years.

What was your first experience of Arts Award?

I walked into my local arts centre, Peshkar, wanting to be the type of person to do community arts and I had no idea what Arts Award was past simply hearing that my friend who had already been with them for years. I didn't make an appointment or anything and I can't remember what I said when I walked in because it must've been an odd thing even for them just to have a teenager show up not for an event or anything, in the middle of the day. But Claire, the then Arts Award Advisor and Outreach and Participation Manager, sat me down and told me that she thought I'd be a good match for Arts Award and gave me her talk about what it was all about. I hadn't been that excited about doing anything for a long time. She signed me up for Bronze then and there.

Which levels did you complete?

Bronze, I did photography, I'd become infatuated with photography after started it at college. I reviewed a play at the Oldham Coliseum.

Which is your favourite level and why?

Having only done the one I'm biased towards Bronze. But I loved doing it because I'd never ever had that level of independence or encouragement to work on something I wanted to do in my life.

What was the best thing that you learnt — about the arts, or yourself — while completing your Arts Award?

This sounds incredibly rehearsed or like I've been paid to say it but I gained an eye-opening experience of art and what it means to a person and how important it is to go and try and enjoy art that you're not necessarily used to. I'll go and puke now.

Did your Arts Award take you to any unexpected places?

Oh my yes. I'd never been on a train before doing my Arts Award. Before I'd even finished the work for my Bronze, Claire got an email from Emrys asking her to put forward someone to be what is now called a Youth Network Leader. I was being asked to represent the North West for Arts Award which was a huge boon. I was honoured to have been asked to be completely honest. Since then, I've been to every region in the country except the North East which doesn't sound huge but considering I'd only ever been to the North West, Yorkshire, and London before it I was pretty happy to get to travel to the places over and over. I spoke at the Arts Award National Advisor Conference held at The Lowry the day after I passed my Bronze which was hugely daunting. It basically put me in the position to do lots of adult-y, independent things for which I'm dead grateful.

Why did you decide to join the Youth Network?

To be honest, I can't quite remember but when I was seventeen, being asked to do this job was huge for me. I was particularly drawn to 'representing the North West' and because I'd grown a keen ear for the arts it was something I was passionate about and the perks that came with it just made me run at the chance. I was also thinking about my future and goodness knows it's helped!

What has been the most enjoyable thing about being on the Youth Network?

There are definitely too many things just to choose one. Anything from meeting so many people I've made friends with, travelling all around the shop, going to events, and, of course, getting my first paid job are ones that come straight to mind.

What advice would you give to anyone thinking of giving Arts Award a go?

Do it and don't scrimp on any effort to start. Just doing the work will enthuse you like no kind of project or assignment you ever worked on in school. You'll learn as much about what you enjoy as the things you learn about the arts.

Read more about the Youth Network and the Bronze Arts Award 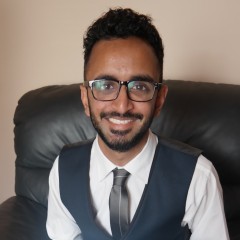 Bhavesh Jadva was completing his Bronze Arts Award,when he was invited to join the Arts Award Youth Network as a representative for the North West. He has since become a key team member, working as an Associate Editor at Voice for the last couple of years.