Daniel completed his Bronze Arts Award at Cornerhouse, working on his scripts, sharing his work publicly and collaborating with directors and actors. We caught up with him to find out all about it.

Before taking part in the Bronze Arts Award I had never openly shared my work with anybody, let alone have actors perform my scripts in front of an audience. Through doing Arts Award I was given the chance to collaborate with directors and actors - which is by far my favourite thing about doing Arts Award. Through work-shopping my piece with directors both via e-mail and in person I learnt a lot about the skills and techniques it takes to write a good play which had never occurred to me before, this helped me understand writing not only as a creative medium but also as a skillset.

Whilst taking part in Arts Award I also went to see 'Britannia Waves the Rules' at The Royal Exchange Theatre. Admittedly this isn't the kind of play I'd initially go and watch out of my own doing, but it truly was an incredible piece of theatre. Although the abstract style of the piece isn't necessarily in keeping with my own naturalistic approach to writing, it proved to be deeply effective in highlighting serious issues such as war, mental illness and working class life in Britain, without it being overly bleak and sombre.

I chose Lena Dunham as my arts hero; an award winning actress, writer, producer and director. I chose Dunham because I thoroughly enjoy her naturalistic writing style which has been described as mumblecore. Her most famous work to date is the HBO show 'GIRLS.' Dunham has used her show to battle a range of issues such as body image, drug addiction, sexuality, mental illness and what it's like being a young person in the current economic climate… all whilst being massively entertaining and funny.

Since doing Arts Award I have carried on with my studies at uni whilst also working privately, developing some ideas for scripts, including comedies and dramas. Since taking part in Arts Award I've really begun considering writing more plays rather than just writing for screen, as I found the process incredibly enjoyable and would love to take part in something similar again in the future! 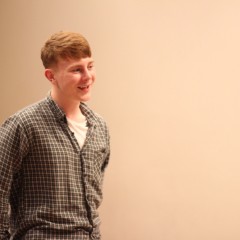 Daniel completed his Bronze Arts Award at Cornerhouse, working on his scripts, sharing his work publicly and collaborating with directors and actors. We caught up with him to find out all about it.