Starring Arnold Schwarzenegger and packed with numerous cameos, Last Action Hero is a metanarrative title that has fun with the idea of its fictionality and the absurdity of the action genre and deserves watching!

Sometimes, instead of racking your brain poring over an intense film you’ve just seen, a film that’s easy to watch and provides cheap thrills and laughs throughout its runtime can be an ideal salve after a long day. Last Action Hero ticks these boxes as a metanarrative action film that openly pokes fun at common tropes. Though it may not be highly rated on IMDB and Rotten Tomatoes, Last Action Hero is definitely worth a look at as a fun movie.

The premise of the film is quite simple – what would happen if you, as a viewer, were transported into the world of your favourite film franchise armed with knowledge that other characters are not privy to? This becomes a reality for teenager Danny Madigan (Austin O’Brien), who, after being given a Wonka-esque golden film ticket by the projectionist at his local cinema, is thrust into the fictional action film Jack Slater IV.

A police detective in Los Angeles, Slater (Arnold Schwarzenegger) is the prototypical action hero who blasts his way through firefights, fearlessly engages in car chases or games of chicken, and is always equipped with the perfect one-liner. The film is aware of its artifice, and takes viewers on an enjoyable journey that explores the nature of filmic fictionality and the aftermath of characters recognising their imaginary status.

Given that Last Action Hero is an extravagant production, there are many over the top moments throughout that will prompt viewers to laugh, such as Frank McRae’s portrayal of Slater’s supervisor, Lieutenant Dekker, who constantly yells at the detective. In addition to this, a set piece midway through the film that sees a funeral interrupted to prevent the release of lethal gas somehow ends with the involvement of a tar pit and another pithy remark from Slater.

In spite of this, there are genuinely good performances in Last Action Hero. Charles Dance particularly shines as Benedict, a villainous character with a glass eye that is changed several times to suit different situations. Contemporary viewers will recognise Dance as Tywin Lannister from Game of Thrones, and his performance in this title is infused with the same calculated menace and spite that sets him apart from others in the film.

While Schwarzenegger was nominated for a Golden Raspberry Award for Worst Actor for his role in the film, he provides a hyperbolic performance that accentuates the superhumanness of the action hero. This is then contrasted with a reasonable exploration of his mortality later in the film, demonstrating that Schwarzenegger is not necessarily a one-trick pony, though he is admittedly better suited to such action-heavy roles.

As a film about the nature of films, Last Action Hero also features cameos from several film stars and nods to real world film series. Robert Patrick, who played the T-1000 in Terminator 2: Judgement Day, appears outside the Los Angeles Police Department, while a poster promoting the film is seen in a video store, though it depicts Sylvester Stallone as the titular Terminator. Ian McKellen appears in a chilling portrayal of Death from Ingmar Bergman’s The Seventh Seal, and many other cameos are scattered throughout the film for viewers.

A high-octane and amusing look at the farcicality of the action genre, I’d definitely recommend Last Action Hero if you’re wondering what to watch tonight! 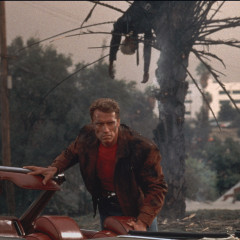 Starring Arnold Schwarzenegger and packed with numerous cameos, Last Action Hero is a metanarrative title that has fun with the idea of its fictionality and the absurdity of the action genre and deserves watching!