Voice MagBlogsA year on from buyin…

I’ve had my Nintendo Switch console for a year. Now that the hype has died down, am I still happy with my purchase?

A year ago, at the height of the first lockdown, I gave into the fanfare and bought a yellow Nintendo Switch Lite. Initially, I used it for several hours everyday and it was an essential part of my daily routine. Now, I barely find myself reaching for it and question whether I should have bought it at all.

My purchase was mostly motivated by nostalgia as I owned a Nintendo DS when I was younger and enjoyed games such as Animal Crossing: Wild World, Mario Kart DS and Nintendogs. Such nostalgia was a main draw for a lot of customers as the Nintendo Switch offered the chance to revisit new versions of old classic games. It also provided comfort at the beginning of the pandemic when it was most needed.

However, I soon found myself comparing my current gaming experience to the one I had when I was younger, and felt disappointed. This was particularly true for Animal Crossing: New Horizons, which used to be my favourite game. I soon grew tired of this new version with its repetitive NPC (non-playable character) dialogue and limited tasks to complete, and I wasn’t the only one feeling let down. This being said, I’ve still managed to clock over 300 hours on my island, though most of these were aimless.

One of my main gripes with the Switch overall is the pricing. The console cost £199, which is fair as a one-off purchase. However, the price of  games on the Nintendo eShop is a different story. My first purchase of Animal Crossing: New Horizons cost £39.99, which at the time seemed worth it given that it was all anyone was talking about online. I now see that this is hugely overpriced for the insufficient amount of content you get within the game.

The same goes for Mario Kart, while The Legend of Zelda: Breath of the Wild costs a whopping £59.99, and there is yet to be any price reductions on these major titles. It would be easy to spend a grand on games alone. Switch users would benefit from the introduction of an affordable subscription service like Xbox Game Pass which grants players access to an extensive catalogue of popular games.

I would recommend the standard Nintendo Switch for people who enjoy multiplayer games, as you have extra features like the detachable joy-con controllers and the ability to connect it to another display, which seems like better value for money. The Switch Lite doesn’t have these features, and the only way you can connect with other players through certain games is by purchasing a Nintendo Online membership, which costs £17.99 annually or £3.49 per month. Essentially, the enjoyability of your Nintendo Switch is dependent on how much you can spend, which is a far cry from my old beloved DS. 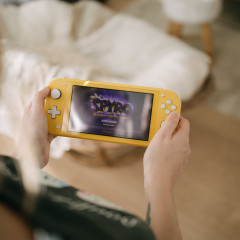 A year on from buying my Nintendo Switch console

I’ve had my Nintendo Switch console for a year. Now that the hype has died down, am I still happy with my purchase?