Featuring a discussion between artistic directors, this session looked at what changes need to be made in the theatre industry, and how leaders in the arts have reacted to the events of the past year.

As with other events at NSDF 21, each panellist provided an audio description of themselves during their introductions and live captioning and BSL interpretation were available for the event.

After the introductions, Nickie began by asking each panellist what leadership is to them. Alan responded first, saying that leadership is about setting the compass bearing for a company and being responsible for the ‘final moral liability’. Katie added to this, mentioning that leadership is about empowering people to perform to the best of their abilities and setting parameters for people to thrive within a space. Tarek also mentioned that though leadership tends to involve a group, leaders are not necessarily always found at the top of an organisation, and that a part of leadership is promoting values and principles which can be positive or negative.

Nickie then asked the speakers what leadership had looked like in the industry over the past year. Alan stated that he had been most impressed by leaders of theatre companies who had been able to pivot their services to assist communities despite not being able to stage productions. Tarek agreed with this but said he had been disappointed collectively by the lack of thought and imagination from some theatre companies. He elaborated, saying that while conversations around what to do were happening, he felt that they often couldn’t progress beyond a reflection stage.

The issue of what change in the theatre industry would look like was also raised by Nickie. Alan said that theatre boards need to be investigated, as he views them as a major barrier to change. He also proposed that theatre companies be given quotas to bring artists of colour in as an ‘unsophisticated solution’ to address inequalities in society. If theatre companies did not meet these quotas, they would lose funding under Alan’s suggestion. Tarek added that there seems to be a fundamental structural problem where money is given to venues and flagships, which then attracts artists and actors, creating a gravitational pull to these venues. This, he stated, needs to be turned around, with infrastructure needing to be built to support the people and artists instead of venues and flagships.

A session attendee also posed the question of how changes could be made by leaders to help BAME and LGBTQ+ individuals reach positions of leadership within the industry. Nickie stated that she felt that current leaders should leave their positions and allow others the opportunity to lead instead. As a disabled person, she felt she was several years behind her peers due to a lack of accessibility, which included not being given the opportunity to fail, which she stated is how we learn. Katie built on this, adding that as a woman, it took her a long time to reach her current position and that if she, as a leader, could help make space for other individuals to flourish, then that would be a success.

The session concluded with Nickie announcing that NSDF are launching an initiative called NSDF Hub. Aimed at supporting artists emerging from the pandemic, NSDF Hub is intended to be a free, year-round online curated space for young people. NSDF hopes that new communities will be created through the Hub, which will be open to all 16 - 25 year olds.

You can find the full video for ‘Leadership in the Arts’ below! 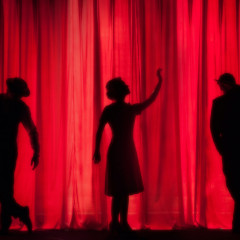 NSDF 21 - Leadership in the Arts

Featuring a discussion between artistic directors, this session looked at what changes need to be made in the theatre industry, and how leaders in the arts have reacted to the events of the past year.